In the previous NATO Trauma Registry publication of the MCI Forum in 2012, the author summarized the history of the initiative. Now the project has been delivered to the second phase with more involvement of the project participating nations. Allied Command Transformation (ACT) and NATO Centre of Excellence for Military Medicine (MILMED COE) have been leading the capability development together. The roles and responsibilities have been clarified, while ACT is in lead of processing the NATO owned NTR software procurement as part of a capability package with other applications, MILMED COE is conducting an experiment on the future data exploitation once the NTR database will be operational.

Trauma Registries are the golden standards in civilian trauma patient care for performance improvement, quality assurance and trauma system development. Few countries have implemented a military counterpart of such a system, collecting combat casualty care in different military operations. Since the peace time trauma care regime is not fully applicable in the area of military operations, the adaptation of the system is required.

Nations with larger number of combat casualties established a military trauma registry to find answers for the challenges of combat casualty care. These databases have many similarities and differences, according to the national concept of casualty management, but all the systems have proved their benefit and committed to the evolution of the current state of the art military trauma care. The amalgamation of de-identified national trauma registry cases in one common system would enhance the standardization and also the evidence based approach in war surgery.

The idea of founding a common NATO Trauma Registry became apparent among the national military medical services; the capability development also has got approval from NATO side. The Committee of the Chiefs of Military Medical Services in NATO (COMEDS) tasked the Military Health Care Working Group (MHC WG) to take the lead and involve other experts in coordination of the project. The MHC WG created a temporary body, the NTR Task Force to execute a pilot study on the feasibility of the NTR. This study report was discussed in the previous publication in details and also available in www.coemed.org website.

The current publication is reviewing the recent activities of the NATO Trauma Registry Task Force including the MILMED COE NTR module development. 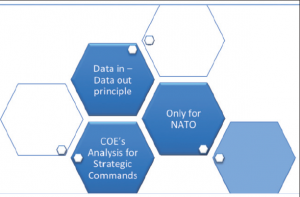 In spring 2012 the NATO Communication Command and Control Agency (NC3A) was ready to announce the NTR procurement to the industry, ACT funds were secured to carry on. The NTR software prototype – developed by the NC3A, became business confidential. Since this product was no longer available to the Task Force, other solutions were needed to be sought.

Finally ACT and MILMED COE found a solution and split the efforts in two different tracks. ACT established a plan how to manage the process of the acquisition and implementation of the NATO Trauma Registry as part of a logistical capability package. The requirements were presented to the industry and the bidding competition is ongoing. The expected deliverable will be operational in late 2015.

The second track is being managed by MILMED COE; this effort is to prepare the nations and NATO for the exploitation of the NTR database. The database is – strictly speaking – only the backbone of the system; however the collected data should be further analysed. Well, this analysis capability should be developed and get ready by the time NTR is online.  The COE lead experimentation is responsible for the “System” development around the unprocessed and raw database.

The non-availability of the previous NTR prototype (NC3A) inducted the decision of the MILMED COE Sponsoring Nations to actively fund the development of a core software/application in order to proceed further the task with this tool.

The NTR software was planned to accommodate the 100+ NTR Core Data Elements and capable to make basic search and perhaps basic analysis for standard reports. The COE contracted an IT engineer to design the module. The first application was demonstrated in the 2012 June Task Force meeting with huge success. The SMEs of the TF evaluated the application and recommended further changes.

In the meeting the MILMED COE announced the opportunity of creating not only one module but two modules. With minimum additional data entry fields the module could serve as the core of the different individual national trauma registries.

The original module was not intended to collect and store demographic data since NTR should store de-identified data only. Furthermore the original module should not edit or modify the submitted national data since this is the nations’ responsibility and would be against the data integrity.  However with the addition of this few options the module can create a basic trauma registry capability for the project participating nations.

MILMED COE then tasked the IT developer to create the two modules. To distinguish the two applications, the original module became COE Module and the second one became National Module. The National Module is available for the MILMED COE Sponsoring Nations for no charge, and for third party nations for a non-profit price.

The available Core Data Elements determine the minimum collectible data elements for nations. The NTR Modules are designed to capture these elements; however the common understanding of an element can be different from nation to nation. The previous NTR Pilot Study reviled the different approaches and mechanisms which are already in place in the existing trauma registries.  The differences are even more specific in the coding system of symptoms, interventions or diagnosis.

To pass on this deadlock the Task Force and the IT engineer agreed to open the data fields of the NTR modules in order to receive any data for any particular data entry field. According to the plans, after having a 6 months data exchange period between the GBR & COE module and USA & COE module, the Task Force can evaluate and standardize the accepted data entries one by one.

The 6 months data exchange is scheduled for Q3 and Q4; the Task Force is expecting GBR and USA to forward the 2012 year data at this time. The legal framework for the national module software distribution and for the data sharing is slightly delaying the original timetable.

The distribution of the National NTR Module created liability of the owner of the software (MILMED COE), so this situation required a creation of a legal framework for the software distribution. This is the End User License Agreement where the parties are defining the different responsibilities and rights. 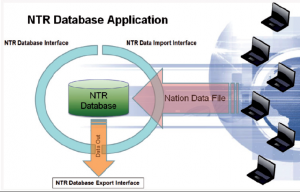 The MILMED COE as the owner has the ultimate right to dictate the ways of usability of the module e.g. the number of end users, the updates for the software and the options for modification. The User may request modifications for the National Module in order to widen the capability of the trauma registry with the permission of the owner (MILMED COE). The User should maintain the compatibility of the modified application with the COE Module; probable incompatibility will terminate the ability of data exchange and consequently the participation in the NATO Trauma Registry project.

The data sharing agreement is another legal framework; since the data are non-identified the agreement should be achieved in time.

Considerations of the future system employment

The distribution of the National Module is in process to the COE Sponsoring Nations, one third party nation is already indicated that they wish to purchase the application.

The COE Module has been installed and ready for the six months pilot data exchange with GBR and USA. The two NTR modules are obviously compatible with each other by definition, NTR COE Module and the already existing GBR and USA trauma registries are also able to perform data transfer. Nations wish to contribute to the NTR project are welcome, they can use not only the MILMED COE  National Module but develop their own application or use any off-the-shelf product, as long as it is compatible with the COE Module. The data transmission is described in the Figure 1. Nations are responsible to export the data according to the NTR Data Import Interface; this interface is also provided to the data contributors.

The principles of the future NATO Trauma Registry is depicted in the Figure 2.

More rules need to be discussed in the upcoming NTR Task Force meeting.

The NATO Trauma Registry initiative is arriving now to the second phase; the capability development has already been started. Allied Command Transformation is leading the procurement of the future trauma registry application for NATO, while MILMED COE is managing the future exploitation of the populated raw data. In order to prepare nations to data utilization and exchange, MILMED COE developed software to capture and store the NTR Core Data Elements. The NTR application is available for project contributing nations as a starter kit for their own trauma registry capability.

The basic principles of the COE managed project are explained in details above and also noticeable in the annexed figures.

The NTR Task Force should consider transformation to an expert team in near future under the umbrella of COMEDS Military Health Care Working Group.

Dr Robert Balazs is the vice chairman of COMEDS Military Health Care Working Group and the former Secretary of the NATO Trauma Registry Task Force. He currently works for the NATO Support Agency in Luxembourg as Medical Technical Officer.