This article is designed to provide a short summary for medical personnel with limited military experience to understand how the medical staff function works within a military headquarters. It places planning military health services support in the context of wider planning for military operations. It starts by examining the Contemporary Operating Environment and the role of military forces within it, then considers the generic military planning process and how the medical staff in a headquarters plan the medical support to military operations. The final element of the article is a discussion of the composition of the personnel required within a medical branch in a military headquarters.

This article is designed to provide a short summary for medical personnel with limited military experience to understand how the medical staff function works within a military headquarters. The paper describes some of the principles and factors involved in managing health services support to military operations. The phrase ‘health services support’ is specifically chosen to encompass all aspects of the role of the military medical services in the prevention of disease, the evacuation of casualties and their subsequent clinical care. It is not yet UK- or NATO-endorsed doctrine. Health is not merely the absence of injury or disease, in its widest sense it includes physical and mental well-being. In a military operational context, health is the ability to carry out duties unimpeded by physical, psychological or social problems. The medical services make a major contribution to force protection, sustainability and the moral component of Fighting Power by the prevention of disease, the rapid treatment of the injured, wounded, or diseased, their medical evacuation, and eventual recovery and return to duty or discharge from Service. Effective medical support is fundamental to mission success and the provision of appropriate and visible medical support demonstrates both military resolve and the nation’s commitment to its forces. Clearly, whilst medical care is an important element of maintaining health, the actions of many other agencies, led by the Chain of Command, also have important responsibilities in this area.

This paper places planning military health services support in the context of wider planning for military operations and concentrates on the contemporary operational environment (COE) described in the Future Land Operational Concept (FLOC). This sees the nature of future land conflict across a spectrum of activities ranging from humanitarian activities through stability operations to major combat operations. 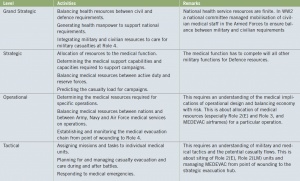 Medical Activities at each level of war

Whilst many nations use military medical personnel for the provision of health services for military personnel in the home base, military medical organisations exist primarily for the relief of suffering on the battlefield through the provision of deployed military health services. Although nations have a moral and legal duty to provide health services support for their own troops, not all nations can provide the full capability themselves. Thus there may be substantial multi-national collaboration to ensure sufficient deployed medical capability and capacity for a military force, which may possibly include the military forces of the indigenous country. The deployed military health services may also need to collaborate with national and international civilian health agencies in the host country. These relationships can be summarized in Figure 1 taken from UK Joint Medical Doctrine.

British Defence Doctrine describes the principles that underpin the employment of military power, alongside diplomatic and economic power, to achieve national strategic objectives. The UK’s approach to crisis management is always ‘cross-government’ i. e. involving more than one department of state (certainly the Ministry of Defence, the Foreign and Commonwealth Office and the Treasury). It usually involves multi-national and multi-agency partners. The military component of this approach will inform the shared analysis of the situation. Collaborative planning between all of these stakeholders will determine both the task and the purpose for each activity such as the use of military forces, diplomatic engagement and development aid assistance required to achieve the desired outcome. It will also direct the execution of military activities, and contribute to a shared assessment of progress. 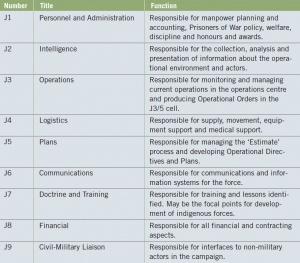 There is widespread agreement that the focus of current military capability should shift from inter-state war to intra-state and trans-state conflict including counter-insurgency operations (COIN). The FLOC describes the military’s role in crisis prevention and post conflict stabilisation. This is achieved through promoting security and stability, building institutional capacity, Security Sector Reform (SSR) and development. These functions may require military forces to contribute to the delivery of essential goods and services if civilian agencies are either constrained or absent. The military contribution to supporting civilian development needs to be co-ordinated with local and international civilian agencies. It should be focussed on meeting basic needs (food, water, fuel) and providing essential services (health services, sanitation and education). This is mainly achieved through the provision of security to enable other agencies to have access to the dependant civilian population but may involve direct delivery of services.

The military framework for command and control is based upon four levels of war. The highest level is the Grand Strategic and is concerned with inter-ministerial co-ordination to implement national policy in a comprehensive approach integrating all of the instruments of state (diplomatic, economic and military activities). The Military Strategic Level is concerned with the allocation of military resources to support the Grand Strategic plan. The Operational Level is about the employment of military forces to achieve strategic goals through the design, organisation, integration and conduct of campaigns. The lowest level, the Tactical Level is the level at which actual combat is orchestrated and battles are fought. In the COE, particularly as a result of the speed of modern media communications, the separation of these levels has become blurred with the potential for small tactical events to rapidly become strategically important.

Western military headquarters are normally organised into a series of discrete staff elements. The Commander is directly supported by his two principal staff officers (Chief of Staff and Deputy Chief of Staff) and specialist advisers (Political/Policy Adviser, Legal Adviser, Medical Adviser). The supporting staff are structured into nine staff divisions and prefixed according to headquarter’s function. 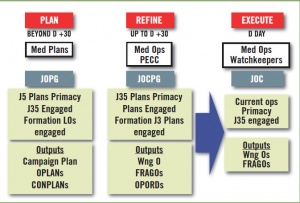 The planning and execution of the military operation is managed by the J3, J5, and combined J3/5 branches, as a multi-disciplinary activity that draws in representatives from all of the specialist branches. The shift in responsibility between these staff branches can be summarised as the Plan-Refine-Execute (P-R-E) process. Military planning utilises the ‘Estimate’ which is a formal tool for structured problem-solving. The medical aspects of the Estimate are considered in a separately. A range of planning documents may be produced as a result of the Estimate including: Campaign Directive, Force Instruction Document, Operation Plans (OPLANS), Contingency Plans (CONPLANS) (J5), Operation Orders (OPORDs) (J3/5), and Fragmentary Orders (FRAGOs) (J3/5). Each of these will have a health and medical services component. The staff branches monitor the performance of the plan on behalf of the Commander using a range of tools including Reports & Returns, Operational Analysis, and formal assessments and reviews.

There is considerable similarity between military medical planning and civilian emergency planning, but the military environment is about planning for the certainty of trauma casualties rather than the possibility. In addition there are important differences in the nature of the environment, the type of injury and the organisation of the medical system. NATO medical doctrine [7] lists the following as core outputs of a medical staff branch: medical support planning and execution, managing medical evacuation (MEDEVAC), maintaining medical situational awareness (monitoring, tracking, assessing and reporting medical capability and capacity), issuing functional policies, implementing Clinical Governance, advising on Force Health Protection, co-ordination with the other staff functions, and medical information management. 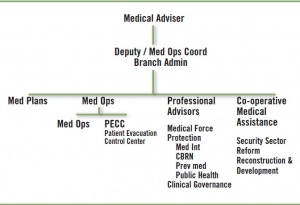 The senior medical staff officer is the Medical Adviser within the Commander’s principal staff and controls subordinate medical units on behalf of the Commander. The medical staff branch is usually organised within the J1/J4 area under the Deputy Chief of Staff but contributes to and is supported by staff outputs across the headquarters. Through his deputy he maintains oversight of the medical contribution to the P-R-E process to ensure that the medical estimate, plan and execution are coherent and effective. The Medical Plans cell provides medical advice to the J5. The cell co-ordinates with Operational Analysis for the production of the Casualty Estimate and the Air/Aviation cell to obtain and assign aeromedical evacuation resources. The Medical Operations cell is responsible for medical advice to J3/5 and J3 and may be divided into two functions: the Medical Operations Cell and the Patient Evacuation Co-ordination Cell (PECC). The Medical Operations Cell works with J3/5 to plan medical support to specific tactical activities. It also maintains the current medical Situational Awareness picture through operational and medical Command Information Systems and manages Casualty Regulation across medical facilities. The Patient Evacuation Control Cell is responsible for the planning and execution of all MEDEVAC tasks by ground, Rotary Wing or Fixed Wing transport. The PECC co-ordinates with higher and sub-ordinate formations/units and internal staff branches of Aviation, Air and Movement. The PECC supports the J1 branch for Patient Tracking and Reporting. The PECC either works within Med Branch or in the Operations Centre dependant upon the precise structure of a HQ for a specific operation. It is usual for the PECC to be manned on a 24 hour basis and is the primary point of contact for the HQ Medical Branch.

The medical branch should be established for specialist health functions. Force Health Protection is the most important and would be led by a specialist in Environmental Health, Public Health or Occupational Medicine. This cell would supervise the collection of medical intelligence, promulgate Force Health Protection instructions and act as the lead for investigating outbreaks of ill-health. There may also be an individual responsible for Healthcare Governance (HcG) across the medical system. This role would monitor the performance of MEDEVAC against clinical timelines, assure HcG processes in medical units and investigate any concerns regarding clinical performance.

Military health services have an important role in the evolving operational concept of the ‘Comprehensive Approach’ that integrates military, pan-government and multi-agency sectors in conflict resolution. This would be led by a co-operative medical assistance cell which has two roles. The first is within Security Sector Reform by supporting the medical services of the indigenous security sector (army, police, border police etc) and collaborating with the J7 staff branch. The second is engagement with the indigenous civilian health sector (Ministry of Public Health, health aspects of Ministry of Education, health sector International Agencies such as the World Health Organisation and health sector Non-Governmental Organisations (NGOs) such as the International Committee of the Red Cross and Medecin Sans Frontieres in order to support the health aspects of humanitarian assistance and reconstruction and development.

References with the authors