At a meeting in Brussels October 2010 initiated by USA it was discussed how to enhance Balkan regional military medical activity. The outcome was that USA and Norway would establish an assessment group together with Serbia and Macedonia with the aim to assess and develop a concept, and identify medical operational regional capabilities for a Balkan Medical Task Force (BMTF).  On the South East Europe Military Medical conference in Belgrade in April 2011 co-chaired by Serbia and Norway, all West-Balkan countries supported the idea for establishment of a medical task force. As a result Serbia, Macedonia, Albania, Slovenia, Bosnia and Herzegovina and Montenegro (hereafter referred to as the West-Balkan countries) have signed the mandate for the assessment group and have dedicated permanent representatives to the group. Organizational and legal documents were been developed by the assessment group in the period of 2010 – 2013.

The aim of the BMTF is enhancing utilization of existing military medical capabilities in the West-Balkan region into the framework of a Multinational Medical Unit (MMU), facilitating deploy ability and sustainability for longer than one year period. It includes: operational requirements, organization,  training, materiel, personnel, facilities, interoperability, functional relationships, financial support. 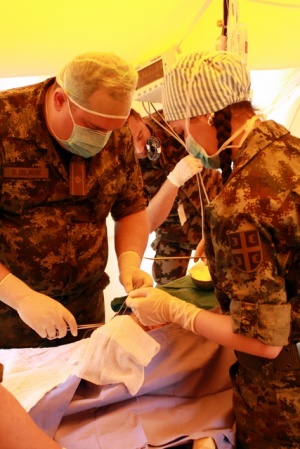 BMTF will be a MMU and as a deployable modular military capability mission tailored for a broad spectrum of crisis response operations. The BMTF will be built upon the existing national medical capabilities in the West Balkan region. The BMTF maximum level of medical ambition is NATO Role 2 Enhanced (Role 2E) and the minimum level of ambition is a tent based NATO Role 2 Medical Treatment

Facility (MTF). The following guiding principles for the establishment of the BMTF apply: best use of available resources and existing structures as well as close co-operation with national and international entities; multinational funded organization; enhancing efficiency of national medical capability building, training and interoperability efforts; utilization of available medical capabilities using a training cycle model with rest, training, certification and stand by period; the peacetime establishment of a standing multinational BMTF Standing Organization (BMTF SO). BMTF SO is responsible for unit preparation and deployment;  status of an International Military Organization (IMO) for BMTF synchronization of regional medical disaster response efforts; utilization of existing NATO/EU/UN medical standards; evaluated and certified according to NATO CREVAL program and STANAG 2560. NATO approved policies and doctrine will be applied in development and building up the BMTF and also will be used as basis of its internal procedures. When AG mandate ends, SO must be activated with main task to build up the unit.

The inevitable demand for greatest practicable interoperability between NATO, UN, PfP and EU Nations conveys specific implications in the area of medical support. Multinational co-operation allows more nations to participate and use national medical assets more efficiently, without duplication and the loss of effectiveness. Development of the Modular Approach (Mod A) in NATO facilitates thus integration of nationally provided medical modules, sub modules (i.e. staff or equipment or fully functional units with staff and equipment) into BMTF enables involvement of nations which by themselves are not able to build up a whole deployable Medical Treatment Facility. EU closely follows NATO’s efforts on Building Capability through Multinational and Innovative Approaches and Multinational Approach to Military Healthcare. All NATO, UN, PfP and EU requirements for deployable Medical Treatment Facilities will be met by the BMTF. Regional disaster response operations pose great challenge to every nation of the West-Balkan region. It is required to establish, train, evaluate, certify and keep medical support available on short notice-to-move (NTM) for disaster response. The NTM should not exceed 2 days for Medical Operational Reconnaissance and Liaison Team (MORLT), 5 days for core modules or advanced party capable of providing Damage Control Surgery and Resuscitation at arrival and 10 days for the whole BMTF. BMTF required having 7 standard days of supply (SDOS) available from Classes I-V and 30 days SDOS for medical supplies. Arrangements for (re)supply, maintenance of materials and critical equipment must be in place. To achieve the main goal to have a full operational capable (FOC) unit in 2015, the establishment of the BMTF must be in accordance to this timeline: Assessment phase: 2011-2013; Build-up phase: 2013-2015; Standing period Nr. 1: 2015-2017. BMTF will reach its initial operational capability (IOC) in the Build-up phase in the beginning of 2014 as a company size task force. Standing period Nr.1 will last for two full years. During the standing period Nr.1 the BMTF can be used for regional deployment only.  After the standing period Nr.1, BMTF could be capable for deployment out of region.

BMTF will become the state-of-the-art multinational medical unit deployable to NATO/EU/UN missions within and out of the West-Balkan region.

The purpose of the BMTF is to provide medical support at the Role 2 level on Crisis Response Operations (CRO) on a sustainable level and to give rapid response to a broad spectrum of regional disaster relief situation. The goal is to enable the participating nations to provide vital capabilities to international operations and enhance national medical service capacities and to achieve national NATO and Partnership for Peace (PfP) force goals (capability targets).

The BMTF will be a multinational military medical unit composed of medical modules formed from contributions of nations: ALB, BIH, MKD, MNE, SRB and SVN referred to troop contributing nations (TCN). One of the nations will act as framework nation (FN) on rotational basis. A medical/medical - support officer will head the BMTF. The BMTF SO will be based on a peacetime establishment (PE) when BMTF is not 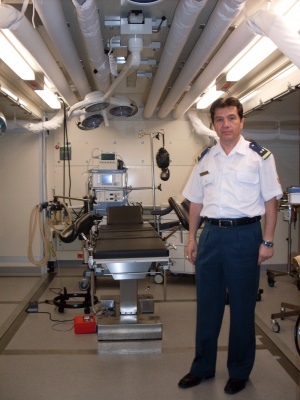 activated. The organizational structure of the BMTF will consist of : Command; HQ Staff; Medical Treatment Facility; Evacuation; Patient Evacuation Coordination Center (PECC); Logistics. BMTF composition can be augmented by additional modules if required and if available by troop contributing nations. Commanding officer (COM BMTF) – Lt Col/Col (OF 4/OF 5) will be responsible for all processes in the BMTF build-up phase and will have operational command in case of activation upon TOA. COM BMTF will be tasked by and report to the Steering Board (SB). Nations will forward all requests to the SB for activation of BMTF. The Steering Board will approve BMTF rotation, training plan and budget. Respective relationships will be set up by MOU(s), terms of reference (TOR) and other agreements.  BMTF Chief of Staff (COS BMTF) has command and control over all staff elements in the HQ and is responsible for staff operation, coordination and administration. COS will report directly to COM BMTF. A medical officer will be responsible for commanding the MTF (COM MTF). COM MTF will report directly to COM BMTF. The MTF will be in principle composed of the following modules:  Reception/Triage, Outpatient ward, Laboratory, Dentist,   X-ray, Surgery, ICU, Nursing Wards, Pharmacy, Sterilization, Storage. Evacuation section will consist of three ground ambulances with Medical Evacuation Teams with one commanding officer in charge for all three teams.  PECC will consist of three watch keepers and three assistants, with shift leaders in charge of coordination. BMTF logistic unit will consist of the following: Technical Engineer, Medical Technical Engineer, Transportation, Medical and blood Re-supply, Class I – V, Life support element.

All required activities such as education, training, evaluation and exercises will be utilized to keep the BMTF at high readiness and manned by well trained personnel. Level I individual training including credentialing and Level II module and team training including certification of BMTF personnel will be national responsibility, however minimum training requirements should be set. Level III unit training, integration, evaluation and certification will be of shared responsibility of acting FN and COM BMTF in accordance with MEDEVAL and CREVAL criteria. The BMTF will be certified on level III before the standby period. Multinational NATO/EU/UN courses will be used to meet minimum training requirements. At least one multinational certification field training exercise (FTX) will be organized and conducted prior to the standby period in accordance with BMTF training plan. Command post exercises (CPX) must be conducted in accordance with the rotation plan for key personnel in the HQ and MTF staffs.

Bulk of the infrastructure and equipment will be provided by the FN. BMTF will be able to deploy with minimum 7 standard days of supply (SDOS) and 30 days for medical supplies. TCN are responsible for resupplying of their deployed modules. BMTF resupply organization and coordination is the responsibility of FN. BMTF will be equipped in accordance with the NATO medical standards. Standby BMTF modules’ personnel and equipment will be located in national home bases.

Manning of the staff positions, specialist functions and the subunits will be multinational. Teams’ personnel preferably will be provided on national basis. The total number of BMTF personnel will be kept below 200 PAX. The BMTF SO will have minimum of 6 multinational personnel on rotational basis, based on national policy. COM BMTF, COM MTF, S-3, S-4 and Head Nurse will be from the FN, COS BMTF should be from a TCN.

Unless activated, framework infrastructure and modules will be located at their national home bases. The core subunit facility of the BMTF will be a Role 2MTF provided by FN. BMTF full operational capability (FOC) will be reached by the end of 2015. BMTF SO will be located in R Macedonia. The BMTF core medical capability can be extended to a NATO Role 2E equivalent MTF in accordance with participating nations’ decision. The core capability will be supported by evacuation, PECC and logistics subunits being standby at their national home bases.

A high level of interoperability is required among the nationally provided modules, sub modules or teams to assure successful accomplishment of BMTF’s mission. Existing NATO standards will be utilized to enhance interoperability of personnel, equipment and procedures which will foster interoperability among the participating in BMTF nations. All the personnel must be familiarized with the provided equipment. Calibration and certification of equipment will be responsibility of nation providing it. COM BMTF is responsible for development and approves common Standing Operation Procedures (SOPs). COM BMTF is responsible for drafting of financial application procedure and sending it to the Steering Board for approval. BMTF working language will be English. Participating nations, with regard to their national plans, will make bids on BMTF Crisis Establishment (CE) during Steering Board meetings. The Steering Board will be responsible for the BMTF rotation plan which will have lines for description of required modules and capabilities in timely manner to let participating nations decide about their bids. The rotation time of BMTF will be in principle one year, however participating nations may have different rotation time based on their separate bi- or multilateral arrangements. The BMTF SO will have a peacetime establishment (PE) composed of: COM, S-1, S-3, S-4, S-5, S-6, and Senior Medical Officer (SMO) as a minimum in the build up phase and Standing period Nr.1. Rotations of COM BMTF and key positions in the HQ staff must ensure adequate continuity. COM and COS should as a principle never rotate at the same time. The BMTF, as a multinational medical organization, is strongly connected to its

participating nations’ military medical services. The BMTF establishes functional  relationships with all needed organizations. Participating and sponsoring nations provide funds to BMTF SO, build -up phase, trainings and exercises during the build - up phase and the funding of the BMTF when it is activated in accordance with agreed MOU. Rules of Engagements (ROE) will be developed by the COM BMTF and approved by the SB. The BMTF will be MOU based Multinational Medical Unit (MMU). The each participating nation will nominate a Senior National Representative (SNR) whit disciplinary authority over the assigned national troops. The BMTF will act according to the Geneva Conventions.