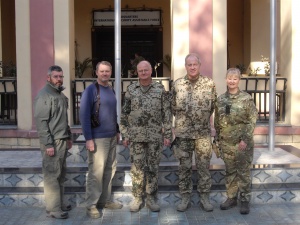 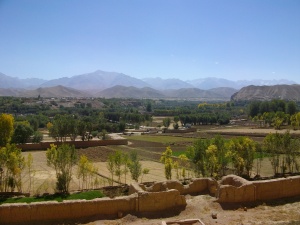 The main task of the former Medical Advisors at HQ ISAF in Kabul was closely linked to the strength of the troops and the intensity of prevailing battle action. Both have been dramatically reduced within the last two years of ISAF. The basis for that was the decision at the London Summit in 2010 regarding ISAF where the participating nations decided to hand over the security responsibility for Afghanistan to the proper Afghan Security forces. This process, which was conducted in a step by step process finally ended with a ceremony on 18th June 2013, when the ISAF Commander Gen Dunfort ( US Marines ) in attendance of the Afghan President Karzai
solemnly declared the end of the NATO led responsibility .
However, troops stayed in the country to support the Afghan Forces. Towards the initial capabilities of RSM, the troop’s strength which continuously had grown up to 130.000 in the year 2012, was downsized to 12.000 until December 2014. This radical process had to be followed by the Medical Service. Both the dramatically reduced strength of the ISAF troops and the ongoing withdrawal from the participation of fighting activity resulted in a reduced number of soldiers being in need of medical assistance. Following the troops, a lot of Role 1 facilities had been dissolved, whereas the Role 2 and 3 surgical capabilities still remained in the centre of the still active bases and supported the further withdrawal. Together with the MedEvac Helicopters being stationed at these bases they were the core of the famous “1 - hour - radius -bubbles” which allowed the troops to operate. The dramatic reduction might be seen by the following: As in the beginning of the tour 36 bubbles covered nearly all Afghanistan, in the end only 9 were left over, which reduced the operational radius strongly and created inactive gaps between the areas of medical coverage. This might be seen as weakening of own capabilities. However, in the logic of the handover of the security responsibility to the Afghan side, this simply showed the will towards transition and for that had to be accepted by the troops. 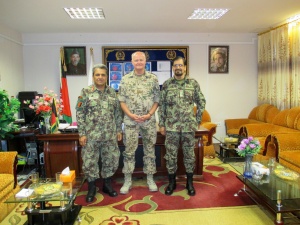 Visit in the Mazar-e-sharif Military Hospital

Apart from these future planning tasks, the most pleasant part of the time as Medical Advisor at HQ ISAF in Kabul was the continuous contact to allied medical personnel at Kabul and the out - stations. The visits to the US - hospital in Bagram and the facilities at Herat, Mazar - e - Sharif and Kandahar gave a deep insight in their various capabilities. These visits to the different troops locations gave a perfect overview over the various capacities and abilities. All medical personnel proved to be well educated and dedicated to the mission, and also the Role 2 and Role 3 medical treatment facilities showed an extraordinary high level of dedication and medical as well as surgical preparedness. Simply the number of emergency beds and surgical treatment rooms were differing. Such international experience should not be missing in the personal experience of a commanding medical officer. The visit to the Role 2 at Herat was even depicted on the homepage of the Spanish MOD.

The second but continuously evolving task was the support to the Afghan Security Forces and Institutions. This latter comprised the Afghan National Defence Forces, as mainly represented by the Army as well as the various entities of the Afghan National Police. Primarily, there was never a discussion about the necessity for medical support. This included the regular health care of the soldiers and policemen as well as the treatment of battle injuries. However, this had to be taken more in account, as for the year 2013 the statistics proofed 4600 soldiers or policemen of the Afghan forces killed, with “merely” 125 of the allied troops. This outnumbered by far the numbers of the wounded and killed soldiers of the ISAF troops in the years before, when the international community cared for Afghanistan’s security. 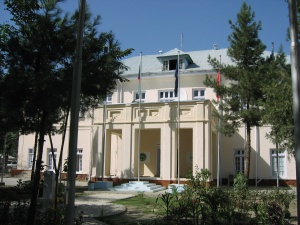 The last but most exciting task was the assistance in the reconstruction of the Afghan civilian medial service. The Afghan civilian medical service has succeeded in a sharp reduction of birth death and has contributed to a massively prolonged life expectance. However, the deep dependence on humanitarian assistance by foreign countries had to be overcome. For that, a medical council on the level of medical educated parliamentarian deputies had been convened in order to work out a first draft of medical regulating laws, which could be used as a very basic level of quality management. The incumbents were highly medical skilled and had been educated in foreign countries, so as an exception,  direct communication was possible. Indeed, a high variety of suggestions and proposals were discussed and some results became part of a protocol. The problem shown not only in the medical field was the fact that the technical level was unquestionable. However, the problem had to be seen in the realization. Even the proposal of a parliamentarian discussion was severely discussed in this council. Only the way ahead was still complicated. In the end, it was clear, that Afghanistan would be depended on international aid for quite some time. This opinion was unanimously shared between all stakeholders in Afghanistan.