THE CULTURAL CHALLENGE OF LEADING IN MILITARY MEDICINE

We all lead teams. In the military, our team is normally identifiable even if the members come from different backgrounds. At the beginning of our career, these teams are usually small and it is easy to communicate at a personal level with each member. As we progress, we lead larger teams. As an example, I commanded a field hospital on a major military exercise to the Middle East. This was much more challenging because, although the leadership structure of about 100 people came from my own unit, we were reinforced with nearly 300 additional personnel from the Navy, Army and Air Force and from other nations. Since then I have led different sized teams from a variety of backgrounds in both national and multi-national organisations. This experience has led me to reflect on the influence of the cultural context at both the individual and organisational level while I led them to meet the needs of our patients. This article is based on a presentation on ‘The Cultural Challenge of Leading in Military Medicine’ delivered at the 43rd International Committee of Military Medicine World Congress of Military Medicine in May 2019.

All military medical services have the following strategic challenge: to deliver a garrison health system that delivers military personnel fit for role and, concurrently, to train and operate a deployable medical system that can care for casualties of conflict on military operations. We do this within a complex cultural environment of military, professional and organisational identities. At present, almost all military medical services are undergoing some form of change as our nations adjust to threats in the international security environment and how they wish to use their armed forces. The purpose of this paper is to discuss the factors that influence culture within military medical systems in order to support organisational change.

The quote ‘culture eats strategy for breakfast’ is often attributed to Peter Drucker, a famous management academic. It emphasises the importance of the softer, emotional context in which humans operate within an organisation and the influence of culture on the behaviour of an organisation as it responds to challenge and change. This paper is structured around the concept of a ‘cultural web’ as described by Johnson and Scholes in the 1990s (1). 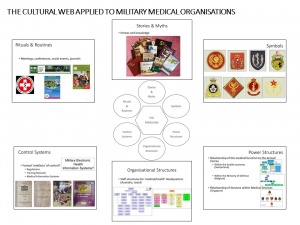 Symbols. Let’s start by considering ‘Symbols’. Symbols are the images that we use to represent our teams. The range of symbols provide significant insight into ‘tribal’ groups within organisations. They are often much more prominent in military medical organisations than comparable civilian ones.

Using the UK Defence Medical Services as an example, there are badges that represent different groups of people. Badges define individual organisations, such as the Joint Medical Group, the Institute of Naval Medicine, 2nd Medical Brigade or the Aeromedical Evacuation Squadron. These create a sense of identity for members of each organisation – though there may be further internal sub-divisions. There are also badges that identify the medical services in the Royal Navy and the Royal Air Force. However, the medical services’ identity in the Army is based on professional badges for nursing (Queen Alexandra Royal Army Nursing Corps), dentistry (Royal Army Dental Corps) and veterinary services (Royal Army Veterinary Corps); with the Royal Army Medical Corps covering all other professional groups including doctors, medics, radiographers, paramedics, physiotherapists, pharmacists etc. Thus a single individual may concurrently associate their loyalty to their organisation, their profession and their service.

Power structures. The next domain to consider is ‘Power Structures’. Power is a complex fusion of formal authority, informal influence and the control levers that enable leaders to direct their subordinates. There are two levels of power that affect military medical services. The first is the strategic relationship of the medical services to the Armed Forces. This can be divided into relationships with the wider national health economy and relationships within the Ministry of Defence. The national source of power relates to the role of the military medical services within a nation’s health economy and the authority of the Surgeon General to have a seat at a senior, national, level. In some nations the Surgeon General is a member of national, strategic, cross-department committees. In other nations, the Surgeon General is subject to oversight by other cross-ministerial boards or committees. An example is the role the military Surgeon General in the Swiss Federation (3). This position includes several roles: the Head of the Armed Forces Medical Service; the Commissioner of the Federal Council as Head of the Coordinated Medical Services of all national medical resources in response to a nationwide crisis; the Medical Advisor to the Chief of the Armed Forces and to the head of the Federal Department of Defence, Civil Protection and Sport; and finally responsibility for the medical and technical standards of the Armed Forces Medical Service and of the Red Cross Service organisation according to Swiss laws and civilian standards.

Within the Armed Forces, most Surgeons General have the dual role of being the senior adviser on health matters to the Ministry of Defence and also the head of the staff branch within the Ministry of Defence for the delivery of health services. The power of the Surgeon General is determined by his/her authority to speak directly and independently to the senior leaders. Some can report direct to the Minister of Defence; others have to report through Personnel or Logistic staff. In Belgium the Surgeon General is the based in the Defence Staff reporting through the Vice Chief of Defence Staff to the Chief of Defence. Separately, there is a Medical Component Commander acting as leader of all medical services with a status similar to the Land, Air and Naval Components (4).

The second power structure is based on the relationship between the medical staff in the Ministry of Defence, any Joint organisation and the Service medical services. In some nations, the Surgeon General is solely a co-ordinating staff authority (with responsibility for medical policy and clinical coherence), with the Chiefs of the Navy, Army and Air Force owning the medical organisations for their Service. In other nations, the Surgeon General owns all the military medical manpower and provides the people into the organisational structure of the Services when needed. There is a global trend to make military medical services more Joint and to reduce duplication of medical activities between Services. In the Republic of Singapore, the Singapore Armed Forces Medical Corps is responsible for medical policies and commands the Military Medicine Institute and the Force Medical Protection Command (5). The Military Medicine Institute is responsible for primary care medical centres and dental centres to the Singapore Armed Forces. However, the Army Medical Service, Air Force Medical Service and the Navy Medical Service have separate identities working to each military service.

Organisational Structures.  We will now consider ‘Organisational Structures’. This analysis considers how military medical services are internally organised and the staff structures that provide the leadership for the military medical function. Most nations have separate staff branches for operational medical support, garrison medical support, medical policy and force health protection, medical personnel, and medical logistics. There is also an increasing trend to have a discrete staff branch for medical information systems. As an example, the Australian Joint Health Command is divided into staff branches for health services (organised on a regional basis), force health, health capability, policy and strategy, and finally resources and plans (6).  There is no separate staff structure that commands medical services in the Army, Navy or Air Force though there is a designated senior officer who is the Director General for medical advice to the head of each of the military services. The staff structure for the medical services in the State of Israel has 5 departments (7). The Military Medical Services Department covers: healthcare, preventive medicine, and medical classification. The Combat and Operational Medicine Department covers trauma and combat medicine, NBC medicine, operations, and doctrine and training. The Chief of Staff covers manpower, logistics, finance, medical information and medical engineering. There is a Military School of Medicine within the Hebrew University covering research and professional education and the Military Medical Academy and Training Centre provides courses for medics, paramedics and practical field skills for all professional groups. These examples show that there is wide international consensus on the core medical staff functions required to lead and manage a military medical service.

Control systems. The next domain to consider is ‘Control Systems’. There are many formal systems that organisations use to direct and co-ordinate the activities of medical personnel within the internal structure of a military medical system. The image on Figure 1 shows some examples of historical regulations, training pamphlets and guidelines within the UK military medical system. The authority for the existence of most nations’ militaries is based on military law. This is usually translated into internal regulations that describe the business processes for directing the Armed Forces. The example is the 1938 edition of Regulations for the Army Medical Services which was first published on the formation of the Royal Army Medical Corps in 1898. Handbooks and manuals used in training set the baseline of knowledge for members of the organisation. The example is the 1952 version of RAMC training that set the curriculum for first aid and nursing for medics. There may be very specific instructions for key ‘drills’ such as the Battlefield First Aid training manual (published in the 1990s); or guidelines for clinical practice across the medical system – such as Clinical Guidelines for Operations that were first published in 2004. For the future, we also need to consider the implications of electronic medical information systems as an emerging mechanism for internal control of military medical services.

Rituals and routines. In addition to formal control systems, most organisations evolve informal systems of human collaboration based around ‘Rituals and Routines’. Indeed, these are often more powerful in building the human relationships that drive the outputs of an organisation than formal control systems. Examples are meetings, conferences, dinners and academic journals. These help to build the sense of identity and to form the social relationships within the team. Notably in military medicine, many nations and organisations sponsor an academic journal to communicate emerging intellectual thinking prior to incorporation into formal documents. These also provide a medium for internal communication across the organisation. Figure 1 provides examples from the International Committee of Military Medicine and Medical Corps International Forum.

These domains of the cultural web set the conditions for the organisational Paradigm – the unifying pattern of ideas and beliefs that represent how an organisation behaves to deliver its outputs. In military systems the paradigm might be expressed as a motto, vision, mission or purpose. Examples of published paradigms are shown in Box 1. 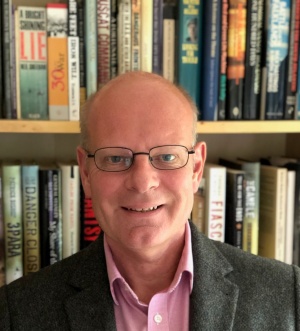