Brigadier General Dr Kowitz, you have been holding the position of Director MMCC/EMC since August 2019. How has MMCC/EMC developed?

First of all, I would like to thank you very much, Ms Lange, for having invited me to this interview for your third issue. When talking with international colleagues, the feedback regarding your journal "European Military Medical Services" of Beta Publishing is very positive. I thank you for accompanying and supporting the exchange of knowledge and experience in particular of the European medical services with this journal. Back to your question. 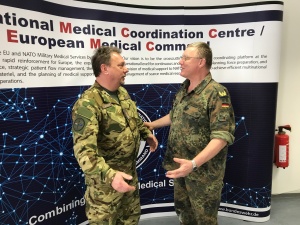 When I took over as Director MMCC/EMC from my predecessor, Brigadier General Dr Most, whom I would like to thank for his excellent preparatory work, the staff consisted of 7 personnel. Owing to the influence and commitment of the Surgeon General of the Bundeswehr, Lieutenant General Dr Baumgärtner, all German billets of MMCC/EMC were opened for manning with effect from 1 October 2019, and have been manned with priority since. Beside our NLD medical officer, France will permanently man a billet at MMCC/EMC from September 2020 on.

We have been able to triple our personnel strength over the last few weeks. The new personnel must be trained and integrated. This takes time. Full operational capability (FOC) of MMCC/EMC shall be established by the end of 2021. Furthermore, working procedures and structures within MMCC/EMC and between the stakeholders are gradually developing. At the moment, the focus of the buildup is on information exchange and coordination with all major interest groups, and on the development of expert networks.

How successful has been the combination of both NATO and EU initiatives so far?

As the lessons learned during operations have shown, most medical support concepts are based on multinational solutions and concepts. Furthermore, there is a huge dependency between civilian and military stakeholders in NATO and the EU in the medical service functional domain. There exists an operational capability gap with regard to the further development of civil-military coordination and cooperation between NATO and the EU. MMCC/EMC is the ideal body to close this capability gap since its roots originate both in a NATO and an EU initiative, respectively.

During the 2014 NATO summit in Wales, the heads of state and government of the member states adopted the Framework Nations Concept (FNC). One of the projects started under the FNC was the Cluster "Medical Support" from which in May 2017 the eight participating nations developed the Multinational Medical Coordination Centre (MMCC) Initiative under the coordination of the Bundeswehr Medical Service. In 2017, the Council of the European Union established the Permanent Structured Cooperation (PESCO). The European Medical Command (EMC) project, for which the Bundeswehr Medical Service assumed the coordinating role, was listed among the initially agreed projects.

None of the nations is capable of ensuring the provision of all facets of medical support required for a NATO- or EU-led mission/operation on its own. Therefore, both initiatives pursue the goal to further increase interoperability and operational readiness of medical capabilities through coordination and support. This also includes to strengthen and make use of cooperation between the military medical services and the civilian health systems of the respective nations.

In conformity with the COMEDS declaration of 2018 and the EU-NATO Joint Declaration of 2016 and 2018, MMCC/EMC is further developed as one entity. Our project is an example for new ways of cooperation and serves as a role model for the efficient use of resources through coordinated national efforts and multinational cooperation. Goals, tasks, and processes at MMCC and EMC are highly similar and comparable although different institutions are served. Our team pursues the goal to exploit the strengths of both organisations - NATO and EU - for mutual benefit.

A presentation given during the meeting of the Directors of NATO's International Military Staff (IMS) and the European Union Military Staff (EUMS) on the development of MMCC/EMC was received favourably. Furthermore, the tasks and activities of MMCC/EMC were illustrated at the EU Military Committee where the project was assessed as one of the most purposeful ones having a high benefit. Plans are to hold a presentation at the NATO Military Committee (MC) in the coming months.

What is the international acceptance of MMCC/EMC?

On 4 September 2019, the 14 member states during a solemn ceremony signed initial operational capability (IOC) of MMCC/EMC. On the occasion of the COMEDS Plenary held in Brussels in late November 2019, the Slovak Republic signed the joint declaration of initial operational capability, and at the beginning of 2020, finally, Poland and Lithuania joined the MMCC/EMC project. As of April, thus, 17 European nations are cooperating at MMCC/EMC.

In particular the scarce resources in the field of the medical services are motivation for many NATO and EU partners to provide their contribution to our organisation in the future. This contribution may be gradual: Participation in the activities of our Programme of Work, cooperation in the SME network (communities of interest), temporary dispatch or permanent assignment of personnel to MMCC/EMC.

During the preparation of exercise US Defender 2020, a deployment exercise of a combined joint division from the United States to Europe, close contacts with USAREUR in Wiesbaden and USEUCOM in Stuttgart have been made. Regrettably, the exercise fell victim to the COVID-19 pandemic. In addition, there are close personal contacts with the US Transportation Command (TRANSCOM) Patient Movement Requirements Center EAST in Ramstein that coordinates strategic MEDEVAC of the US armed forces. Another important stakeholder and point of contact for strategic MEDEVAC for the MMCC/EMC is the Aeromedical Evacuation Control Centre (AECC) at the European Air Transport Command (EATC).

Which are the activities of MMCC/EMC so far, and what are your further plans?

The last six months have been very labour-intensive and successful. We have gained valuable experience, especially in the field of exercises and war gaming. We conducted a multinational tabletop exercise (EX Casualty Move - CAMO 2020) to train medical support concepts of a multinational major unit (larger formation) within the scope of a NATO Article 5 joint operation (MJO). With 60 participants from ten nations, incl. representatives of NFS/NCS headquarters, this exercise was a great success. All training goals were achieved and important lessons learned.

Based on the experience gained from a number of tabletop exercises (TTX) in the last twelve months, the preparations of the NOR Medical Service to take over as Lead Nation of the medical treatment facility (MTF) at Kabul airport were supported with a one-week TTX.

Based on a network of experts of the national medical services, we started to establish a picture of the medical situation at operational level during the preparation of exercise US Defender 2020. MMCC/EMC, thus, functions as a military medical information and reachback hub for NATO and EU. In this context, the nations are asked, after prior consultation, to provide MMCC/EMC with current and, thus, reliable information for instance on the capacities of intensive care beds or special beds, or of laboratories for diagnosing highly infectious pathogens if required. We want to be ready and available as a broker of information when it is required. When a nation needs support in a crisis, for instance to distribute across Europe as quickly as possible an elevated number of burn patients after a disaster or a terrorist attack.

In cooperation with the Federal Office of Civil Protection and Disaster Assistance we hosted a workshop early March 2020, not long before the flaring corona crisis, on civil-military medical cooperation focusing on large-scale emergencies that are marked by elevated numbers of injured or sick persons. Although some participants regrettably had to cancel their participation owing to the preparations for the emerging corona crisis, the workshop with participants and lecturers from seven nations was very successful. The participants analysed previous large-scale emergencies with a medical focus, as for instance terrorist attacks in the United Kingdom and Belgium. One day of the workshop focused exclusively to the corona crisis. All workshop participants agreed that not only the results of this workshop, but also best practices and operational observations from the current corona crisis should be part of further activities in this field. To this end, MMCC/EMC will conduct a war game in cooperation with the European Centre of Excellence for Countering Hybrid Threats (Hybrid COE).

There were first cooperation activities with an international network of experts under the lead of King's College London that organised a workshop captioned War gaming the Pandemic's Effects. The MMCC/EMC war gaming project aims to provide a substantial contribution in order to be better prepared in medical terms for hybrid threats or the outbreak of an epidemic.

How has MMCC/EMC been involved in the corona crisis so far?

The corona pandemic is a particular challenge, especially for the European Union, since Europe stands for open borders, a free and liberal lifestyle, close economic integration and unimpeded exchange of goods. Professor Łukasz Szumowski, Polish Minister of Health and cardiologist, in a newspaper interview describes the reaction of the European states to the corona crisis: "As a result, almost every country in the EU has quickly sealed itself off. This is understandable, because the first priority is always to protect our own citizens. But now is the time to talk about European solidarity and a removal of restrictions at a later date. We must learn to rebuild the Union".

"Cooperation, solidarity and multilateralism are key to our common success against coronavirus", the High Representative of the Union for Foreign Affairs and Security Policy, Joseph Borrell, wrote on Twitter. In this understanding, several Laender (federal states) offered treatment stations in Germany for intensive care patients. So far, almost 200 patients from France, Italy and The Netherlands have been transferred to Germany. Also the Bundeswehr hospitals treat international patients. In addition, there have been material donations.

For a young multinational facility still in the process of being established, the corona crisis is both a challenge and a chance. Our NLD liaison officer who usually works permanently at MMCC/EMC provided decisive support to the short-term establishment of a central patient flow management organisation in The Netherlands. Part of the MMCC/EMC staff was directly involved in the work of the CORONA Operations Support Coordination Centre at Bundeswehr Medical Service Headquarters. Here, contacts between the international medical services were established, professional expertise combined, and first observations and experience at operational level gathered. This collection of best practices and observations shall be exploited for future activities of MMCC/EMC, like stockpiling or railway movement of patients, to be better prepared for the next crisis.

To conclude: would you like to leave a final message to our readers?

We, the team of the MMCC/EMC, have a mission assigned to us by the nations. To fulfil this mission, we must - despite or perhaps especially because of the current corona crisis - stay focused on achieving full operational capability of MMCC/EMC. However, achieving this goal requires the support of NATO and the EU, as well as of the participating nations.