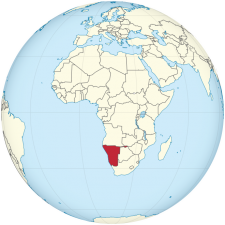 The Defence Health Services Directorate is the branch of the Namibian Defence Force responsible for medical facilities and the training and deployment of all medical personnel within the force.

The Directorate is Headquartered in Windhoek at the Ministry of Defence Headquarters. It is headed by the Chief of Staff who is normally a qualified Medical Officer. The Chief of Staff holds the rank of a Brigadier General and functions as the Surgeon General.

The Hospital is situated at the Grootfontein Military Base. It has a capacity for 80 patients, a casualty department, an operating theatre, X-ray facilities and in- and out-patient departments.

A central medical training facility is being built at the Namibian Military School.

Donated by Germany in 2013, it was commissioned in 2019. The Mobile Hospital is rated as a United Nations Level I hospital. It has a capacity of 40 outpatients a day and 20 in-house patient bed capacity, It has two intensive care units, an x-ray unit and laboratories. It can support a battalion group sized combat deployment.

Military Health practitioners are deployed at Sick Bays across all military bases. They also deploy on Peace Support Missions with infantry units.