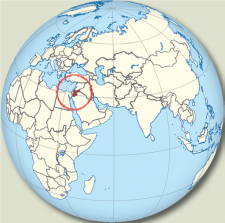 The Royal Medical Services (RMS) provides medical support to the forces in operations. It is also one of the leading health authorities in Jordan, which plays a distinguished role in the Jordan health system and in all aspects of medical and health care levels, at national and international levels.
• Royal Medical Services provides comprehensive and tertiary health care.
• Treat more than 1/3 of Jordan’s population (more than 2 million military personnel and civilian).
• Preserving the health of the officers and soldiers of the Jordan Armed and different security forces.
• Providing tactical medical support for JAF unites.
• Providing medical support during allied military exercises.
• Treatment of complicated medical cases referred by the other health sectors in Jordan.
• Coordination with the Ministry of Health & Private Health Sector on issues of public health concern. 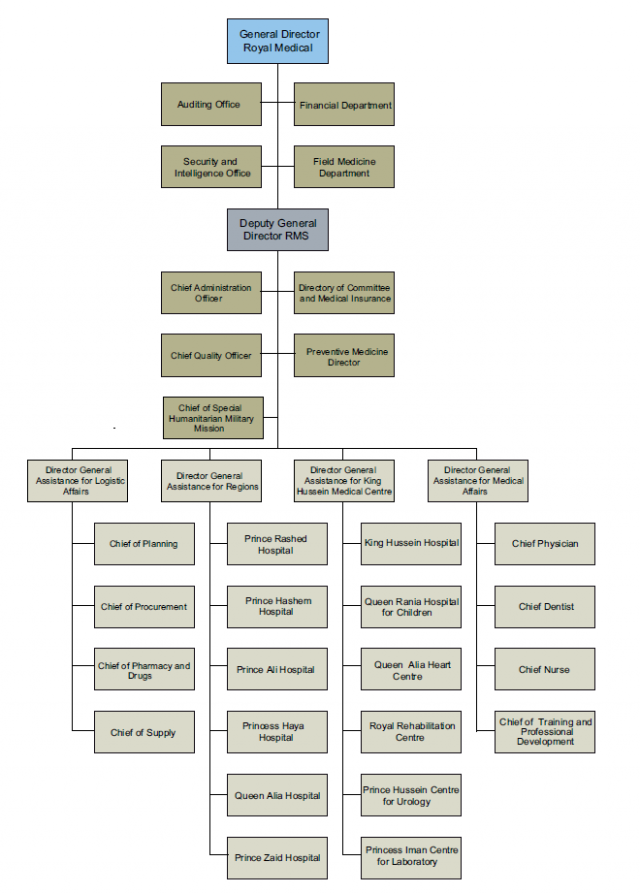 Military Hospitals
King Hussein Medical Centre is the largest and most prestigious multidisciplinary medical institution in Jordan dedicated to providing the utmost in patient care and professional training with a capacity of 1414 beds Although a military hospital, it offers its services to military personnel and their families as well as civilian citizens from Jordan and beyond. It has an excellent emergency department with three nearby helipads and is at the forefront of all mass casualty situations in the country. 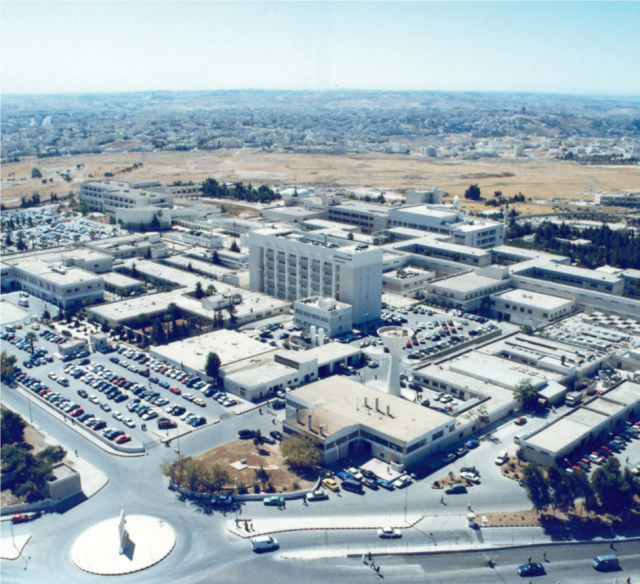 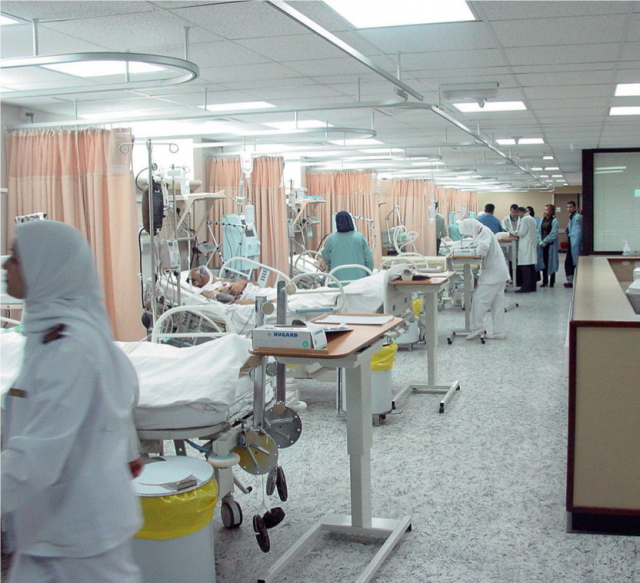 It is comprised of six centres:
1. Al-Hussein Hospital (1973)
It is the largest hospital with a capacity of 720 beds and accommodates 60 beds Emergency Department.

2. Royal Rehabilitation Centre RRC (1983)
RRC is the only centre dedicated to total rehabilitation improving the physical and psychological effects of the disability. The orthotic, orthopaedic, rehabilitation medicine, plastic and reconstructive, burn unit, and speech therapy services are impressive in this centre. 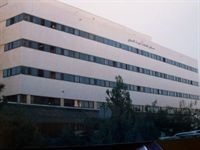 3. Queen Alia Heart Institute QAHI (1983)
QAHI is the only centre offers complete and comprehensive cardiac services to all sectors of the population of Jordan as well as patients from neighbouring countries. It has a capacity of 178 beds.

4. Prince Hussein Centre for Urology and Organ Transplant PHCUOT (2000)
The centre has the latest equipment for the management of kidney, ureter, and bladder disorders. It offers non-invasive treatment of benign prostatic hyperplasia as well as the most recent investigative tools of bladder physiology and erectile dysfunction. It hosts the Jordan Society for Encouraging Organ Transplantation. 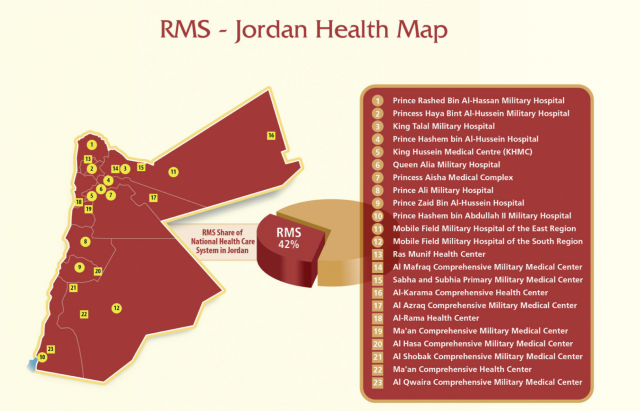 5. Queen Rania Hospital for Children/Pediatric Hospital (2009)
This is the first hospital of its kind in Jordan. It has a capacity of 202 beds. It includes Bone Marrow Transplantation Unit, Dialysis and Kidney Treatment Unit as well as the Infant/Neonatal Section. It accommodates all sub-specialities in paediatrics medicine and surgery.

Prince Hashem Bin Al Hussein Military Hospital (1963) is located in Zarqa. It was recently renovated and its capacity expanded to 421 beds. The occupancy rate is 70%, accommodates 16.000 annual admissions and almost 3600 operations a year. Includes 10 renal Dialysis units, laboratory and radiology investigations strongly support all the other medical services.

Prince Rashid Bin Al-Hassan Hospital (1966) is a general hospital with a capacity of 500 beds.

It is a teaching hospital for the University of Science and Technology Medical and Nursing students. Located in Irbid, in the north of Jordan, with an occupancy rate of 85%, accommodates 22.000 annual admissions and almost 6000 operations in a year. The hospital is equipped with a helipad for medical evacuation.

Prince Ali Bin Al Hussein Military Hospital (1981)
Is a general hospital located in Karak, south of Jordan, with a capacity of 150 beds, It hosts all sub-specialities in all branches of medicine and surgery. A teaching hospital for the University of Mu'ta Medical and Nursing students. It is a very busy hospital with an occupancy rate of 75 %.

Is the only district general hospital with a capacity of 86 beds located in Tafileh, in the south of Jordan and serves the whole population in the region.

This facility has a 6 bed Intensive Care Unit, a 4-bed emergency section with a minor operating room and a recovery room. It is a well-equipped modern hospital with Dialysis Unit, Renal Unit, and Out-Patient Clinics.

Is the only public hospital in the district of Aqaba, a Red Seaport. It has a capacity of 240 beds. In addition to being a district general hospital, it houses a12 seat Hyperbaric Chamber that fits with the location of the hospital being a sea resort.

King Talal Military Hospital (2016)
Is a general hospital, located in Mafraq, and provides the population of Northeast Badia of Jordan and the surrounding areas with a capacity of 150 beds. The hospital inaugurated at 1. August 2016.

Princess Haya Bent Al-Hussein Military Hospital
Is a general hospital, located in Ajlun, Northeast of Jordan with a capacity of 150 beds. The hospital is to be inaugurated in the near future.

Aero-Medical Evacuation
A well-organized Aero-Medical Evacuation Centre was established in 1987, it is the only medical facility in Jordan responsible for round the clock aero-medical evacuation of military and civilian patients on a national and international scale. An aeromedical evacuation centre is manned by flight surgeons, flight nurses and paramedics and is equipped with advanced and specialized medical kits including a mobile ICU. The rescue flights utilize both rotary and fixed-wing aircraft of the RJAF. 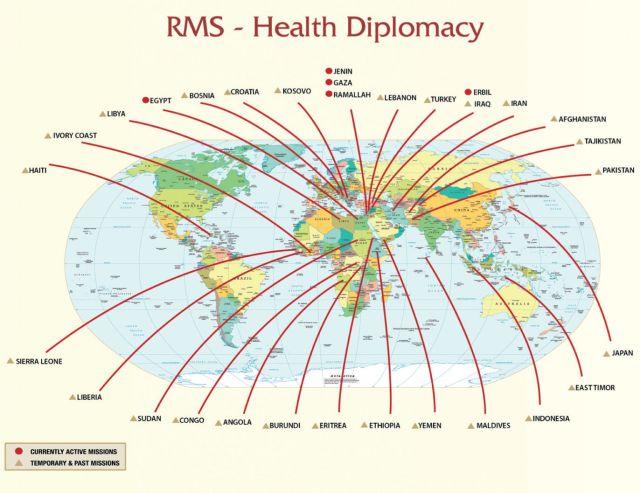