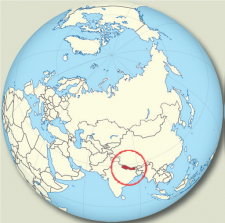 Nepal Army Medical Corps Directorate General of Medical Services is the highest authority to oversee the medical services within the Nepalese Army. Medical services in the Nepalese Army started in 1925 with the establishment of Tri Chandra Military Hospital in Kathmandu. Later in 1990, the establishment of 490 bedded multispeciality Shree Birendra Hospital in Chhauni, Kathmandu commemorates the expanding medical services in the organization.
Nepal Army Medical Corps with 2 449 uniformed personnel is spread all over the country providing free medical care to NA personnel, retired army personnel and their dependents through its tertiary level Shree Birendra Hospital, 2 Field Hospitals, 16 Field Ambulance Companies, 2 GOPDs, Rehabilitation Centre and 7 small medical units spread all over the country.
Nepalese Army has been providing free medical services to retired army personnel and dependents of serving and retired army personnel since 1976 through the Nepalese Army Welfare Scheme. 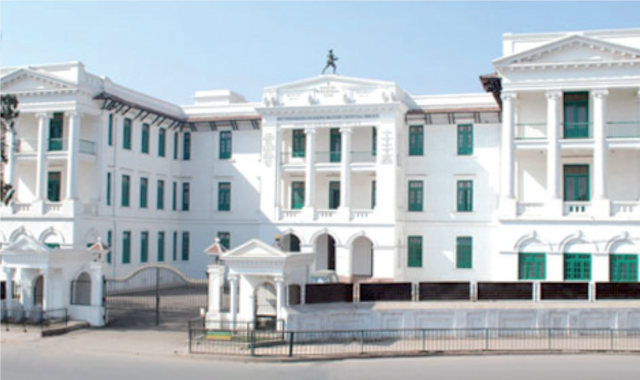 Tri-Chandra Military Hospital was established in 1925 in honour of Nepalese soldiers who dedicated their life in the First World War. Besides the historical identity and its architectural grandeur, TCMH has many more glories attached to its name. It was the first hospital to introduce fibre optic endoscope services and establish a semi-automatic pathology lab in the country. Its upgraded services were shifted to Shree Birendra Hospital in Chhauni, Kathmandu in 1990 availing new technology and treatment modalities like MRI and Extracorporeal shock wave lithotripsy (ESWL), multi-slice helical CT for the first time in Nepal. However, now the hospital is being reconstructed and planned to be utilised for medical as well as other purposes

Shree Birendra Hospital (SBH) is a 490 bedded multidisciplinary tertiary level teaching hospital of Nepal Army with speciality services. This hospital is commanded by Brigadier General directly under Director General of Medical Services with administrative and a clinical registrar to support him.

NAIHS is a service-oriented non-profit making institution with the College of Medicine and College of Nursing and upcoming Medical Polytechnic School and a College of Dentistry. NAIHS is committed to producing quality health professionals in respective disciplines not only for the army but for the nation as a whole at an affordable cost. The concept of NAIHS originated with the imminent need to improve patient care system within Nepalese Army Medical Corps, which could only be achieved by igniting medical potentialities of its health professionals with academic fire by having a medical institute of its own. There is an acute shortfall of the qualified health professionals in the country and Nepalese Army Medical Corps (NAMC) is no exempt.
Medical education is becoming expensive everywhere and is practically out of reach for most people. NAIHS has offered the opportunities of standard medical and health science education not only for deserving candidates from the Army (serving and retired) but also for the qualified civil candidates. NAIHS-College of Medicine (COM) offers MBBS program comprises of 4.5 years of study and a year of internship. NAIHSCollege of Nursing (CON) runs PCL nursing, BN and B.Sc. (Nursing). Shree Birendra Hospital (SBH) at Chhauni which is a 490 bedded multidisciplinary modern referral hospital of army serves as the centre of excellence to undertake all clinical teaching/learning activities for these programs. Addition of a 450 bedded Veterans & Civil Hospital shortly within the premises of TCMH, Mahankalsthan will further strengthen the institute. 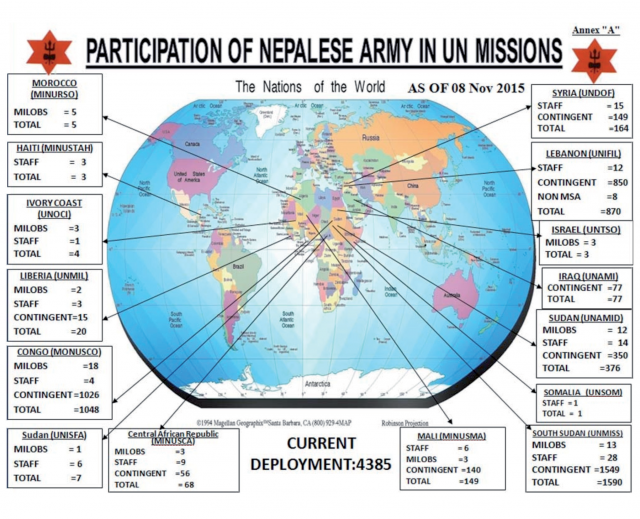 Nepal Army has active participation in most UN Peace Keeping Operations and ranks sixth in the world as Troop Contributing Countries. The participation of the Nepalese Army in UN peace support operations spans a period of over a half-century covering some 41 UN missions, in which over 113,698 personnel have participated. The army’s long association with UN peace support operations began with a modest deployment of five military observers in Lebanon in 1958. As of October 02, 2016, the Nepalese Army has deployed across 15 missions around the world. Currently, it has some 4,403 soldiers including 111 female soldiers serving in 15 different missions around the globe and providing medical care to the peacekeepers as well as the local civilians through 10 Level I Hospitals and clinics. During it service to the Peace Keeping Operations, 63 soldiers have sacrificed their lives and 59 have been injured. 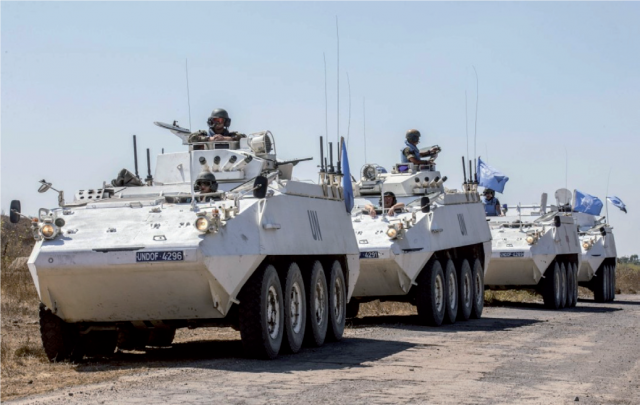 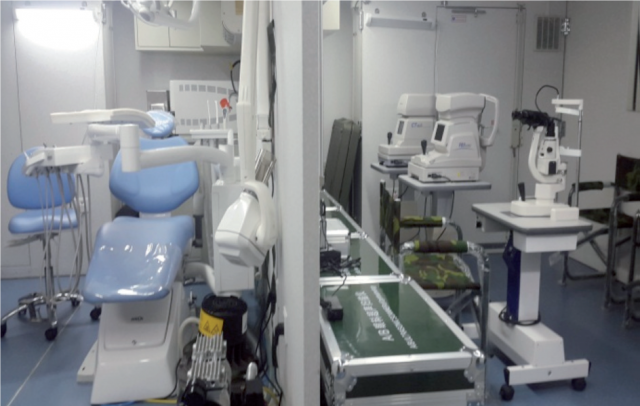 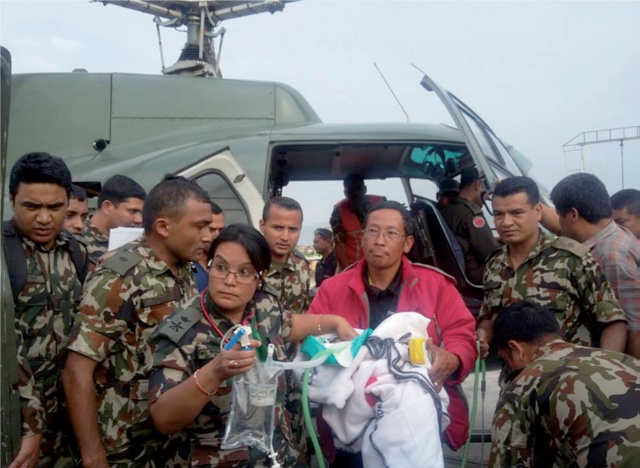 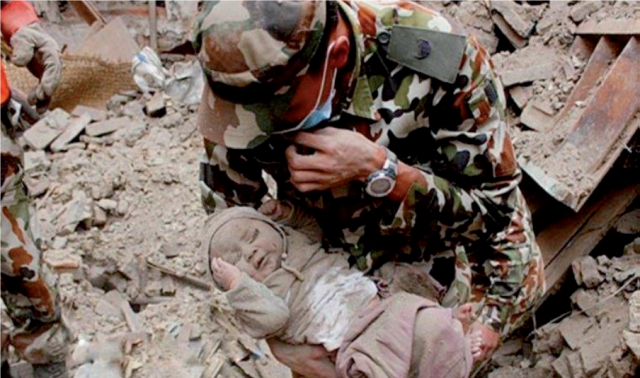 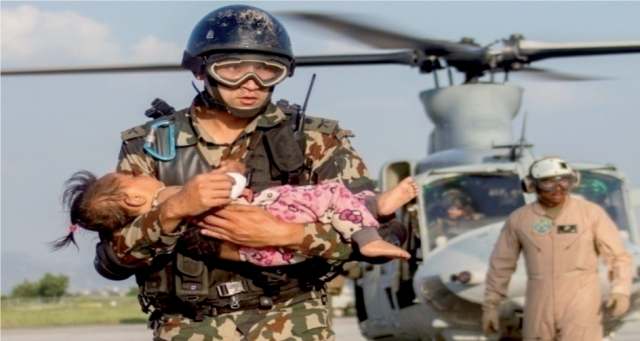 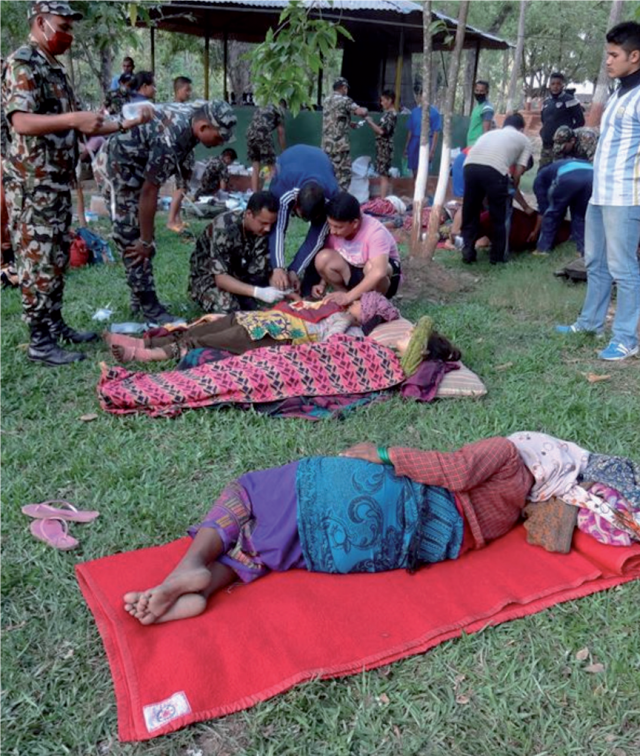 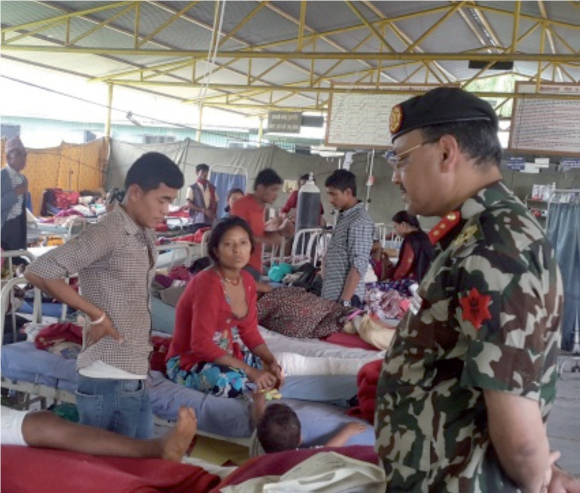 Nepal Army in Disaster Relief
Nepal is prone to various types of natural disasters due to her rugged and fragile geophysical structure, very high peaks, high angle of slopes, complex geology, variable climatic conditions, active tectonic processes, unplanned settlement, increasing population, weak economic condition and low literacy rate. It is a great challenge to the nation to protect infrastructure and property from frequent landslide and floods. Each year flood, landslide, fire, epidemic, avalanche and various other natural and man-made disasters cause the casualty of thousands of human lives and destruction of physical properties worth billions of rupees. The Government of Nepal views the Nepalese Army as an inseparable agency in Disaster Relief Operations. Examples of the particular suitability and capability of the armed forces to respond effectively to such incidents abound in Nepalese history. Furthermore, Nepal's status as a developing country does not justify the high costs of maintaining a separate disaster relief organization. Consequently, the Nepalese Army plays a major role in providing emergency assistance to needy people all over the country - a role that has become even more important following the recent Gorkha earthquake 2015 in which 8,891 persons lost their lives, 22,302 were injured with property worth US$5 billion (5% of GDP) lost.