An overview of the Rehabilitation Medicine in Pakistan Armed Forces: The road covered so far and the journey ahead.

Physiotherapy departments were the only rehabilitation services available in the Pakistani Armeds Forces (PAF) until the mid
1980’s. Training of two surgeons abroad laid the foundation of RM in PAF. Rehabilitation services in PAF are currently the best
in the country with 32 physiotherapy units, 15 departments of RM and a tertiary care Rehabilitation Institute; Armed Forces
Institute of Rehabilitation Medicine at Rawalpindi. PAF has produced the largest number of physiatrists (25) in the country who
have provided valuable services after the Oct 2005 earthquake and during the recent war on terror.
The academic achievements of Military physiatrist eclipse all others working in the civil sector of the PAF

The Pakistani Armed Forces (PAF) are the military forces of Pakistan. They are
the seventh largest in the world in terms of active troops1. The Pakistan armed
forces comprise three main branches: the Pakistan Army, the Pakistan Navy (including
the Pakistan Marines) and the Pakistan Air Force, together with a number of paramilitary
forces. The Pakistan Army, like Pakistan, started virtually from a scratch
on 14 August 1947 (Independence Day), in the face of heavy odds. During these
50 years, the army, like the navy and air force, has evolved into a highly motivated,
disciplined and modern force defending the ideological and geographical
frontiers of Pakistan. 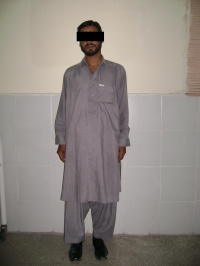 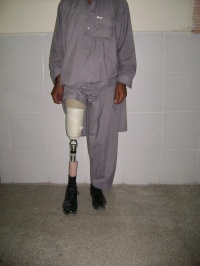 PAF have been a regular contributor to United Nations missions abroad since
1960’s2. They have provided rescue and humanitarian services in times of natural
calamities and disasters both at home and abroad.

The Pakistan Army Medical Corps, (AMC) is the medical branch of the Pakistan
Army. It is a vital part of the Pakistan Army, serving since independence, tasked
to serve a secondary role in Military Services. Pakistan AMC is not only serving the
Army, but also provides civil services in health, rehabilitation and disasters3. AMC
provides specialist doctors to Navy and Air Force hospitals in different fields. Armed
Forces Post Graduate Medical Institute (AFPGMI) located in Rawalpindi is the
oldest Postgraduate Medical education facility in the country4. It was established
in 1953 as Pakistan Army Medical Corps School in Lahore, and then shifted to its current location in Rawalpindi. 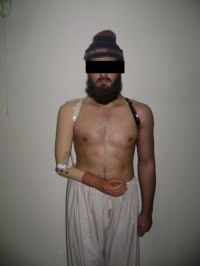 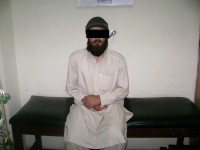 Physical medicine and rehabilitation (PMR) or Physiatry is a relatively young specialty in Pakistan and PAF. It is still confused with physiotherapy and exercises alone; rather than with a concept of multidisciplinary team approach5. In the wake of natural disasters like Oct 2005 earthquake and the ongoing war on terror, PMR in PAF has acquired a new special role. Military physiatrists have provided the severely disabled civilians and war veterans with timely medical rehabilitation services which have reduced the rate of complications and length of stay, improved the functional outcomes and resulted in better community re-integration and follow up plans. The objective of this article is to present an overview of this important specialty in PAF; trace its origins; discuss its present status and
future perspectives.

Pioneers of Rehabilitation Medicine in PAF were interviewed for the historical background and origins of specialty. Telephonic interviews were conducted with the serving military physiatrists all over Pakistan to determine the patient’s workload, expertise, details of the rehabilitation program and critical deficiencies.

Websites of College of Physicians and Surgeons Pakistan (CPSP) and Higher education
commission (HEC) were searched for additional information and insight.

Departments of physiotherapy were established in nearly all major Military and Combined Military Hospitals (MH/ CMH) throughout the country since 1960’s. These were supervised mainly by surgeons and the physiotherapy services were provided by Physiotherapy assistants. These services were able to cater for the musculoskeletal disorders like back pain, muscle strains and sports injuries. But there was no concept of a dedicated rehabilitation program for the severely disabled veterans having spinal cord injuries
(SCI), Stroke, traumatic brain injuries (TBI) and amputations.

The President of Pakistan (1979-1988) General Muhammad Zia-Ul- Haq had a disabled daughter, diagnosed with cerebral palsy. He could understand the pain and frustration of parents and patients with disabilities and the lack of proper rehabilitation facilities in the country. In 1981 presidential directives were issued to establish two centers of excellence in
Rehabilitation Medicine in the country. One was to serve mainly the civilian population
and other was to serve the Armed forces personals and their dependents.

The Legacy of AFIRM

The foundation stone for AFIRM was laid in 1991 by then Chief of the Army Staff, General Asif Nawaz. The construction work on this huge project was rather slow. Although a small makeshift OPD unit started functioning in 1995, the AFIRM OPD block was inaugurated in
2001 and the fully functional Indoor department started functioning in March 2005. 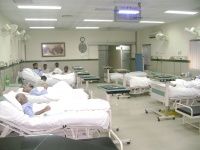 The only functional departments of occupational therapy, speech therapy, resettlements and vocational counseling
in PAF are at AFIRM. (Table 1) The department of resettlement and vocational counseling was established in 2008. It helps the disabled war veterans and their dependents cope with the social and vocational aspect of disability. Additional skills like tailoring course, computer courses and electrical equipment repair courses are arranged to help these brave veterans integrate back in the society as useful earning members.

Although the origins of RM in the country can be traced to Jinnah Post Graduate Medical center in Karachi6, the academic excellence of military physiatrist at present eclipses that their civilian counterparts.

Out of the fourteen approved supervisors and examiners of CPSP in the subject of Rehabilitation Medicine, nine are military physiatrists (7; serving, 2; retired). Brig (R) Pervaiz Niazi has the honor of supervising fifteen of the 23 military physiatrists. The AFIRM is the largest and best equipped training institute in the country in the field of Rehabilitation Medicine.

It is recognized for Fellowship training in RM (under auspices of CPSP) and Diploma in RM (affiliated with AFPGMI, Rawalpindi). Recently four years Bachelors in Physiotherapy was started, in affiliation with University of Health sciences, Lahore. Plans are underway to start a
diploma course in Rehabilitation nursing (with Pakistan Council of Nursing) and bachelors in Orthotics and Prosthetics. Military physiatrists are active in research and publications. About 14 have at least two publications to their credit and one has twenty three. Military physiatrist
have presented their research atnational and international biomedical conferences and won many awards, including the Young Investigator award in the 5th World congress of  International Society of Physical and Rehabilitation Medicine (ISPRM). The first and only
member of ISPRM assembly of delegates is also an Army physiatrist.

Rising to the challenge of Oct 2005 earthquake

Oct 2005 earthquake was a devastating national tragedy with haunting memories and long lasting effects. (Fig 4) Nearly 70,000 perished and 120,000 were injured. The earthquake resulted in an unprecedented number of SCI; the most devastating neurological injury known to mankind. In addition there were hundreds of amputees and patients with traumatic
brain injuries. The health care system was quickly overwhelmed and priority soon
shifted to saving lives rather than taking care of long term disabling conditions
mentioned above. Military physiatrists faced this huge challenge with a missionary zeal and were successful 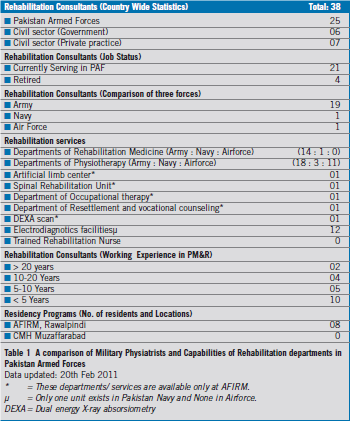 in delivering valuable services1. The only functional spinal Rehabilitation
unit in the country was located at AFIRM with a bed capacity of 20. AFIRM rapidly increased its indoor capacity from 100 to 140 within two weeks. Doors were opened to all earthquake victims irrespective of their affiliation; whether civilian or military. Army physiatrists were called from all over Pakistan on three weeks rotations to AFIRM. These consultants shared
the increased workload and also visited different makeshift Rehabilitation centers in the city to supervise the management and Rehabilitation of SCI, TBI and other severely disabled patients.7

The orthopedic technology workshop worked in two shifts and provided spinal orthotics and modular lower limb prosthesis to around three hundred patients in three months. A 2-day rehabilitation seminar, with emphasis on SCI rehabilitation, was held at the AFPGMI in Rawalpindi in the last week of November 2005. It was designed to increase awareness in the
medical community about this important and neglected field. A 1-month refresher course for physiotherapists was held at AFIRM in January 2007 in collaboration with the Swiss Paraplegic Centre. Physical therapists hired by WHO to facilitate SCI rehabilitation in the civilian sector were trained in transfer, transport, handling, and exercise protocols for SCI patients at AFIRM.
Al-Murshid hospital , Karachi in 2008, in collaboration with AFIRM launched community based rehabilitation program for the SCI survivors from mountainous
district of Balakot. Under this program two military physiatrists visit the field rehabilitation unit on three monthly basis to provide consultation and follow up services to SCI survivors of Oct 2005 earthquake. The patients who need admission for diagnostic workup or management
of a complication are referred to Rehabilitation Medicine department in nearby CMH 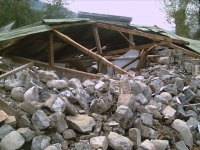 Abbotabad. Military physiatrists also documented and shared their valuable experience of providing rehabilitation services in Oct 2005 earthquake in form of publications and presentations. All these efforts helped in improving the acceptability of RM as an important
specialty in the medical community and projected a positive image nationwide.

The Current situation and challenges being faced

RM has developed a lot in the last decade. The Oct 2005 earthquake gave an opportunity to military physiatrist to prove their mettle. Still there are areas which need attention and should be addressed in order to provide better rehabilitation services to PAF. The first and the foremost is the training of military personal in disciplines such as physical therapy, occupational therapy, speech and language pathology and orthotics and prosthetics. At present these services are being provided by civil staff trained in these fields. Most of the peripheral Combined Military Hospitals have RM departments being supervised by consultant in RM. (Table 1) But they are providing only physical therapy services. There is a need to expand the capabilities of the peripheral rehabilitation departments as well to improve the quality of services. Third issue is lack of research funding in general and for RM in particular. Research based assessments and measurements of functional outcomes in RM are a time consuming job which requires lots of financial support. This is only possible if adequate
funds are available to conduct research. Many if not most, military physiatrist working in the peripheral Combined Military Hospital, sometimes have issues of peer acceptance. Many surgeons and medical specialists are unable to realize the importance of an early referral for Rehabilitation in diseases like SCI, TBI and other rheumatologic disorders like osteoarthritis,
rheumatoid arthritis. Fourth is the lack of a working community based rehabilitation (CBR) plan aiming at social and vocational re-integration of the disabled war veterans in the community. The resettlement and vocational counseling department at AFIRM is working on this issue, but so far a large number of disabled survivors are in need of CBR.

Rehabilitation Medicine in PAF has come a long way from being restricted to small physiotherapy units, to a fully equipped Rehabilitation Institute; AFIRM which is providing services to armed forces personals in the field of spinal cord injury rehab, neurological rehab, musculoskeletal rehab, electrodiagnostics , prosthetic rehab and orthotic support. Still
there is room for improvement in the management of quadriplegics, collaborative research, training of dedicated rehab nurses, peer counseling, home modification programs and community based Rehabilitation programs. There is also a need to train and increase the work force in areas of speech therapy, occupational therapy, orthotics and prosthetics.