Barrier nursing or the management of life-threatening, highly contagious diseases at home and abroad

Although barrier nursing may be considered a niche discipline, it clearly demonstrates the necessity for civilian and military collaboration and the establishment of national and international networks. Despite the problems of dealing with highly contagious, life-threatening diseases for which there are often no causal therapies, the management of such conditions is feasible with a minimum of risk if hygiene guidelines are appropriately followed and isolation measures are systematically imposed.

The term “barrier nursing” is used to describe the care and treatment of patients suffering from highly contagious, life-threatening diseases. These include many forms of viral haemorrhagic fever (VHF), such as Marburg, Ebola, Lassa, Crimean-Congo fever, pneumonic plague and also smallpox, a disease now considered to be extinct. We include smallpox here as, although it has been eradicated, viable strains are still retained in research laboratories and the possibility of a bioterrorist attack using this pathogen cannot be completely excluded. However, there are also a range of viral haemorrhagic fevers that are not highly contagious and are thus not primarily deemed to be life-threatening. Per definition, the term barrier nursing is used in connection with the clinical management of an individual case at home or abroad, but not when referring to large-scale disasters involving large numbers of infected persons or persons who may be infected although, of course, the borderlines between situations in which individuals and many persons are infected are necessarily ill-defined.

Possible scenarios in which barrier nursing may be required

As a result of the increasing frequency of out-of-area deployments and the restructuring of the Bundeswehr that was undertaken to make it into an operational strike force, Bundeswehr service personnel are now exposed to a greater risk of infection with a VHF than the average tourist. Moreover, the transformation of the global political situation following 9/11 means that it is much more likely that acts of bioterrorism could occur.

German service personnel are currently being deployed throughout the world and are thus at risk of infection with a VHF; the most recent example of such a threat situation was the EUFOR RD Congo mission in 2006, in which German units were stationed in the Democratic Republic of Congo and in Gabon. In both these countries, VHF diseases are endemic and there have been repeated outbreaks in the past (most recently of Ebola in Mweka in the Congo in 2007). It was during this mission that the Rapid Response Medical Section Command (Kdo SES) first employed a Barrier Nurse Unit. This is a mobile tent system in which low pressure is maintained and access is provided by a lock system (IsoArc™), so that a patient infected with a haemorrhagic fever can be fully isolated. The system can be deployed in association with a medical rescue centre (Fig. 1). The experiences gleaned during this mission have shown that it is essential that medical personnel should in future be adequately trained in the management of highly contagious, life-threatening diseases in order to preserve operational sustainability in the field.

A specific concept has already been drawn up to deal with cases of infection with a VHF in the field. In addition, every unit of the deployed force must be capable of initiating temporary barrier nursing measures without delay. More problematic with regard to care and treatment is not a case of suspected infection, but a case in which infection has been confirmed. Severe septic symptoms will develop, and there will be major impairment of the patient’s blood coagulation status so that the patient will inevitably need to be provided with intensive care. The primary need will be to manage coagulation status to prevent the risk of multiorgan failure. This anticipated requirement means that personnel must be trained in the appropriate intensive care techniques. Every regimen designed for the therapy of a VHF infection should be weighted towards symptomatic, rather than causal treatment.

To ensure that medical personnel have the necessary skills and expertise, the relevant training has been provided since 2003 through a special course entitled “The management of contagious, life-threatening diseases” (called in brief “Barrier nursing”, training directive No.: 805 031). The course was originally conceived by Bernd Becker, senior intensive care orderly working in Department I of Koblenz Bundeswehr Hospital. The course has been predominantly designed with physicians and nursing personnel specialised in anaesthesia/intensive care in mind, but appropriately experienced assistant physicians and care personnel are also qualified to take the course. Command hygiene officers, health inspectors and technical medical assistants have attended the barrier nursing course as well. The course is held once annually in the Department of Tropical Medicine of Hamburg Bundeswehr Hospital. The theoretical fundamentals are taught with the help of personnel from Hamburg specialised treatment centre (Tropical Medicine Department of Hamburg-Eppendorf University Hospital). Special features of the course are the practical training sessions and the implementation of a barrier nursing scenario, while the participants are also trained in the assembly of an isolation unit in the field. They are also made familiar with the particular requirements pertaining to the wearing of personal protective equipment (see below).

At the core of the barrier nursing concept is the need to provide for the protection of the clinical personnel and to prevent the escape of a highly contagious disease into the environment while, at the same time, not neglecting the treatment of the patient. Appropriate use of the personal protective equipment (PPE) is an essential factor here. The PPE is a pressurised full body suit, with breathing and body protection apparatus that makes it possible for personnel to treat the patient without exposing themselves to the risk of infection. Personnel are subject to specific physical and psychological difficulties while wearing such a biohazard suit.

It is essential to ensure that PPE conforms to the high standards of quality and certification requirements obtaining in Germany. Personnel must be adequately trained in the use of PPE while being familiarised with the corresponding health and safety tenets. There is a wide range of different PPE concepts that have been designed for use in widely diverse situations. A generally valid gold standard in this respect has yet to be defined. Every operational division (e.g. Bundeswehr, professional fire services) puts together a solution from the resources at their disposal that will enable them to complete their assignment. 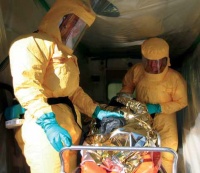 Barrier nursing-related activities of the Department of Tropical Medicine

The management and treatment of patients with highly contagious, life-threatening diseases are complex and wide-ranging tasks. Although it has not been possible in this article to discuss other related aspects, such as the handling of media, disposal of waste and material transport, the training of the medical personnel does take these into account. The concept for “Barrier nursing in the field” is available from Department V 1.4 of the Bundeswehr Medical Office. An analysis phase study and work group (SAGA) is currently considering the final details for the establishment of a barrier nurse unit.

It is also planned to supply prepared material kits to the various Bundeswehr hospitals. These kits will include PPE and air pump equipment together with decontamination and isolation material designed for clinical use. The kits will enable personnel to provide for temporary isolation of patients under barrier nursing conditions until they can be transferred to a specialised treatment unit. The same material kits will also be made available to the relevant units during deployment abroad, although there will be differences to the kits provided in the homeland in quantitative aspects. The materials, currently in store, conform to the corresponding civilian quality and certification standards.

To date, some 120 personnel have been trained in the fundamental skills of barrier nursing, and in 2010 a first refresher course was offered, which included a combined exercise with the professional fire services and Hamburg specialised treatment centre. In future, the course “Barrier nursing” will be adapted to the Eurosurveillance “Curriculum for training healthcare workers in the management of highly infectious diseases” (published in June 2007) to ensure conformity with the procedures used by civilian organisations. This represents the beginning of the standardisation of national and international protective measures. A symposium for experts and members of the standing working committee of specialised treatment centres (StAKoB) of the Bundeswehr and interested members of disaster management services, fire services and aid organisations is to be hold in the second half of 2011 by the Department of Tropical Medicine of Hamburg Bundeswehr Hospital at the Bernhard Nocht Institute in Hamburg

Although barrier nursing may be considered a niche discipline, it clearly demonstrates the necessity for civilian and military collaboration and the establishment of national and international networks. Despite the problems of dealing with highly contagious, life-threatening diseases for which there are often no causal therapies, the management of such conditions – a not necessarily a priori hopeless undertaking – is feasible with a minimum of risk if hygiene guidelines are appropriately followed and isolation measures are systematically imposed.

References with the author

1994 Joined the Bundeswehr as a qualified medical orderly

Address of the Author