Trauma Registries, being collections of trauma-related medical data have proven to be valuable in both the military and civilian medical communities, providing an indispensable starting point of scientific researches and quality performance improvement with the overall aim to develop the trauma system and to improve the medical care. This article is aiming to present the latest developments of the NATO Trauma Registry project and to outline the envisaged future activities.

Presuming that there are some who did not have the opportunity to read the last publication1 on the NATO Trauma Registry (NTR) or are just simply not familiar with the topic, it is inevitable to shortly summarize the milestones of the NTR development from the initial idea to the NATO Trauma Registry Pilot Study executed by the NATO Centre of Excellence for Military Medicine (MILMED COE).

When a nation sends troops to military deployment out of the national borders it is an increasing social expectation to provide the highest level of medical care as possible in the operational area and the trauma patient care be comparable to the peace-time quality. The properly operating and effectively maintained and used military trauma registries are serving the fulfilment of this social expectation forming the basis of scientific researches, health care quality performance improvement and establishment of standardised clinical treatment guidelines. Nations with larger number of combat casualties have established their own military trauma registries to exploit and utilize the potential benefits, however numerous members of the Alliance – considering the relatively small number of trauma cases – are not able to run scientifically and statistically robust analyses. 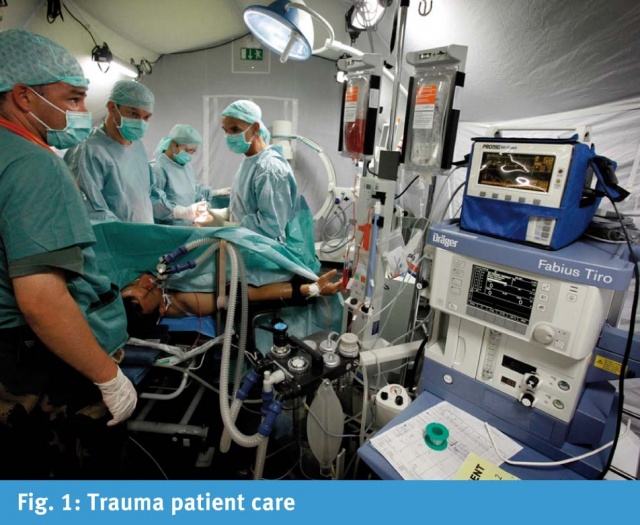 When NATO recognised the need of a common NATO Trauma Registry, several actions had been taken. In order to establish standardised means of communication and exchange of information - what is an essential prerequisite of setting up such a huge, multinational database as the NATO Trauma Registry - a standardisation agreement (STANAG) development process has been launched to provide guidance for standardisation of the transfer formats for medical records. NATO Allied Command Transformation (ACT) implemented the requirements for a common NATO Trauma Registry to the future planned Medical Information and Coordination System (MEDICS), as essential element of its Clinical Support panel. The Committee of the Chiefs of Military Medical Services in NATO (COMEDS) tasked the Military Health Care Working Group (MHC WG) to initiate the NATO Trauma Registry project in 2008 based on the initial research of the NATO Research and Technology Organisation2 . Upon COMEDS mandate the NATO Trauma Registry Task Force (NTR TF) was established under the auspices of the MHC WG in cooperation with MILMED COE to facilitate the development process and validate the progress through the execution of a pilot study. The main objective of the NTR Pilot Study - carried out by MILMED COE - was to assess the feasibility of the NTR. The study has proven to be very beneficial since on one hand it has confirmed that the NTR development was on a good track and the efforts taken by the NTR TF were valuable, on the other hand the results pointed out the main deficiency, the incompatibility of the systems (between the NTR Prototype and trauma registries in place) and an inappropriate level of data standardisation. The NTR Pilot Study final report is available on the MILMED COE website.

When COMEDS approved the report in spring 2012, the NTR TF evaluated the results of the Pilot Study and laid down the direction of further development and numerous important decisions were made.

Focusing on the most significant deficiency, the incompatibility of the existing trauma registries, the NTR TF decided to establish data dictionary for all entry fields of the NTR software. At least the NTR data dictionary is covering more than 350 data fields to describe the circumstances, measures and medical treatment on the different level of medical support along the whole rescue chain in order to provide as much data as possible for further analyses. The so-called 100 Core Data Elements of the NTR data dictionary has been approved also by COMEDS while the other data fields have been established and agreed by the NTR TF. During the multinational NTR Software testing, the medical records were successfully exported from both UK and US Joint Theatre Trauma Registries (JTTRs) to the NTR, so the incompatibility was solved. These major steps in cooperating and data sharing between already existing military trauma registries and the NTR was essential and the contribution by US and UK very beneficial for the project.

Further key factor was to ensure the sufficient amount and up-to-standard medical records for scientific research and analysis and in parallel - taking into account the military nature of these data – to comply with national and NATO security requirements as well as with the medical intelligence interests. This was the reason why the NTR TF decided to develop two NTR modules; the national module can handle personal identifiable and military information (e.g. name, date of birth or rank, service number) and the records can be edited by the registrars, the MILMED COE module (the common database) can handle exclusively so-called de-identified data, in which the “sensitive” information about the individual patient is skipped.

The NTR TF recognised the necessity of standard operational procedure (SOP) document to run the system and provide guidance to the users. MILMED COE prepared the NATO Trauma Registry Concept (NTR Concept), a comprehensive document to introduce the mission and the policy of the NTR, to provide standardised procedures for request of research submission and decision making process as well as user’s manual in one. In order to ensure the proper quality of the request of research, to comply with national and NATO interests and to reflect the military nature of the data a well-defined and transparent request process has to be laid down, furthermore a decisive body, the NTR Approval Board (NAB) has to be established. 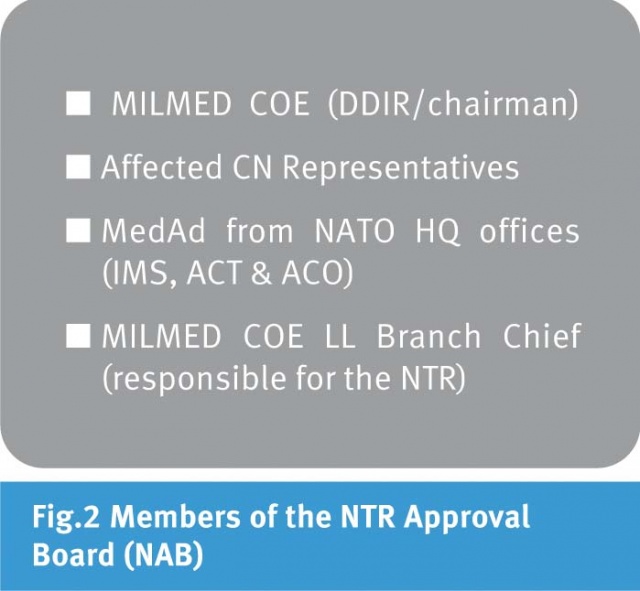 According to the suggested Request of Research Process (RoR) each NTR Contributing Nation is eligible to submit request proposal on the NTR via the Nationally Assigned Medical Representative (NAMR), whose responsibility is to review and approve the requests for submission. From a NATO Command Structure entity (IMS, ACO and ACT) the respective Medical Advisor (MEDAD) assumes the role of the NAMR.

Checking upon the formal requirements of the submitted initiating documentation as well as the contents of the proposal are MILMED COE’s responsibilities; if necessary subject matter experts will be involved into the procedure to cover such special topics as operational security, ethics or public affairs.  The decision on the future of the submitted request proposal will be made by the NAB, namely accept as submitted, accept with modification or refuse the request. The final report of the executed research on the NTR database will be reviewed by the NAB before the delivery to the requesting NAMR or NATO MEDAD.

The NTR Task Force discussed the NTR Concept during the 9th NTR TF meeting in December 2013 and offered for national staffing. The finalized and approved NTR Concept by the NTR TF will be submitted to the COMEDS Plenary for endorsement.

Following the promising initial test of the NTR software a second, 3 month-long (field) test phase will be launched in March 2014 under operational conditions at ISAF with a special focus on field data collection, data export and data transport to the central registry. Additional important aim is to confirm that the two developed systems, the National and the MILMED COE Module fulfil the requirements of confidentiality and data security. In case of the successful field test and the endorsement of the NTR Concept by COMEDS a STANAG should be developed based on the NRT Concept.

According to the planned timelines the NATO Trauma Registry project can reach the initial operational capability (IOC) by the end of 2014 and the developed system can finally start serving the evolution of the current state-of-the-art military trauma care for future operations. As a next step the system has to be integrated into the MEDICS developments and other diseases, which are not so trauma driven, for instance internal or tropical diseases, could be integrated into the system. 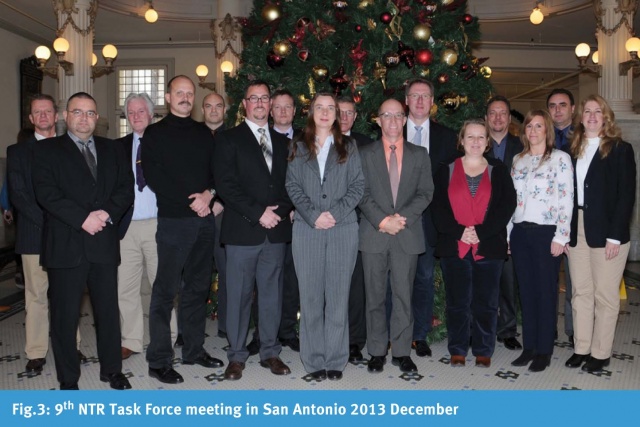