Analysis of Upper Respiratory Tract Infections in the Field

The objective of the study was to process the accumulated medical database of the United Nations Peacekeeping Forces in Cyprus, UNFICYP and make a synthetic analysis of the area-specific afflictions accentuating infections of the upper respiratory tract among Hungarian soldiers.

In 1964 the United Nations Peacekeeping Forces in Cyprus (UNFICYP) had been installed by the UN with the mandate  of keeping the cease-fire between Greece and Turkey. Nowadays the frame of the assignment is shifting to a more political contribution. Hungary has been a constant member of the mission since 1996. The UNFICYP has been settled down in the 190 km long Buffer Zone, which goes from North to South-East in the middle of the island and divides it into Northern-Cyprus, which is habited by a Turkish populace, and Southern-Cyprus, which is habited by the Greek. The UN has split the Buffer Zone into three sectors each controlled by one nation with one battalion-size military force (860 troops), assisted by the military representation of 15 countries and the 80 members of the international police force. Currently 21 nations are represented in the mission.

Control of the sectors and the operations as well as the political representation of the mission are the duty of the international civil/military police, which  has approximately battalion size. To better accomplish the assignments, the personnel for the mission use the infrastructure of the disused National Airport of Nicosia, which is situated in the middle of the operational area in the Buffer Zone under the control of the UN. The majority of the troops come from Europe (GreatBritain, Hungary, Slovakia), further participants of the mission come from South-America (Argentina, Chile).

Hypothesis of the research

During the process of the medical database of the mission it became clear that certain groups of diseases or diagnoses typically have higher prevalence in certain contingents.

Typical and dominant ailments and procedures of the Argentine contingent are dental and stomatological, while  the British contingent showed more musculo-sceletal afflictions and sports injuries and ,the  Slovakian contingent mostly dental problems.In the Hungarian contingent upper respiratory tract infections (URTI) were predominant. An explanation for the higher rate of dental and stomatological deformations could bevarying national protocols concerning pre-mission screening. At the same time, creating a connection between the higher rate of  upper respiratory tract infections and screening protocols are not feasible as there are different pathogens involved. Accordingly, I investigated the probable explanation with a different approach – mainly from the angle of the organic responses of the effective cause.

I looked for the explanation of the fact that the highest rate of URTI was among the Hungarian soldiers in the mission. In my study I searched for medical and microbiological connections in order to answer this problem.

During the research, a specific partial data set of the UN database was analyzed under different aspects. The analysis was made with the co-operation of soldiers from four nations using data representing a period of four years.

Considering that the countries select the participants of the mission based on standard methods and requirements, I examined a homogenous, healthy population looking at age, type of work, working conditions, general physical conditions. The standard system that created the statistical basis of the research is provided by the UN standardized data processing and reporting system. The research was made with three different methods and in the following phases:

I analyzed medical documentations of soldiers of four nations – Argentina, Great-Britain, Slovakia, Hungary – collected over a period of four years. After the primary analysis of 15,749 cases between 1st January 2009 and 31st December 2012 I highlighted the results of 2,521 URTI for further process and studies.

Surveying was also completed with the participation of four contingents. The aim of the survey was to create a database of a real-time state analysis. Almost 600 questionnaires were evaluated and ear-nose-throat physical examinations were proceeded.

Microbiological laboratorial examinations – throat swabs – were performed in 200 cases in order to detect the differences and changes of quality and quantity of the oral bacterial flora.

Results of the research 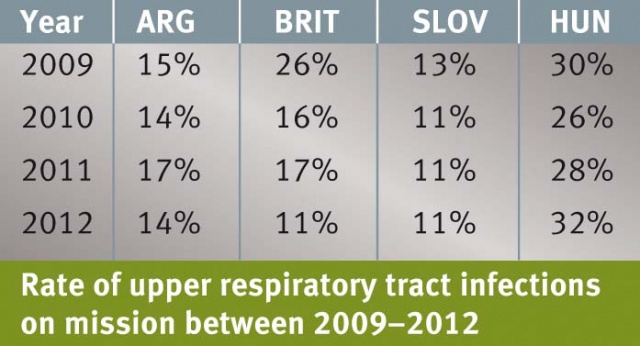 2. Results in connection with groups of ­diagnoses

I created further diagnostic groups from the URTI-group concentrating on two main groups of infection:

3. Results in connection with number of cases per 100 capita

Results of the statistical analysis highlight the fact that comparing different medical indexes and frequency of diagnoses, both subgroups of URTI – infections with common cold or angina – were represented in the highest proportion among the Hungarian soldiers during the  four years survey.

4. Results in connection with tonsillectomy

According to present results I could not disregard the fact that certain previous surgical interventions like adenotomy or tonsillectomy may affect the current medical status and hereby may influence the prevalence of respiratory infections among soldiers. Because of this presumption I extended my research to the qualitative and quantitative processing of the previously performed operations analyzing the surgical procedures in relation to two main groups:

According to the results of the survey 47 % of the Argentine, 55 % of the British, 53 % of the Slovakian and 57 % of the Hungarian contingent mentioned some kind of previous surgical intervention.

According to the processed data of the previously performed surgeries 20 % of the Argentine contingent had received a tonsillectomy, the rate being 64 % among the British soldiers, just 24 %  among the Slovakian soldiers and 65 % among the Hungarian soldiers.

According to the hypothesis based on the present results termination of the protective role of pharyngeal tonsils, which is an intervention altering the protective system, microbiological integrity, anatomical and functional status of the organism, could influence the number of acute upper respiratory infections.

In consequence of the results of the data in my research material I found out that, after the termination of pharyngeal tonsils the number of URTI in adulthood increases without any known reason. This assumption was proved indirectly by the fact that in my research the URTI have less prevalence among those people who still have their tonsils. I assumed that there was traceable relation between tonsillectomies and the frequency of URTI in adulthood. I thought that in those cases where pharyngeal tonsillectomies had been performed oro-pharyngeal bacterial flora were changed without any known reason and the protective function without the functions of the tonsils was decreased - assisting the colonization of certain pathogens along with increasing the frequency of upper respiratory tract infections.

Towards proving the theory, confirming its microbiological reasons and showing the direct relations I took throat swab samples from 200 patients and performed microbiological analyses. The examinations were performed with an equal number of soldiers with tonsillectomies and without tonsillectomies. From the 500 pathogens, which create the oral bacterial flora, I was focusing on 15–20 bacterium phyla.

From the 200 samples which were sent to microbiological analyses 68 samples had positive results (10 phyla, 5 subtypes, 1 fungus were detected), which means 34 % positive samples all in all. In the group with tonsillectomies the number of human pathogens was twice the number (+28) as in the control group under the same number of cases. Among the detected pathogens all play major roles in causing those disease-groups of URTI which I examined.

Among those 100 patients with tonsillectomies and among the 100 patients of the control group the following pathogens were detected, and their rates and discrepancies are shown:

The obvious discrepancy of the detected pathogens among soldiers with tonsillectomies was more significant than in the control group. Especially, if we take into consideration that under the same number of cases the number of the detected human pathogens was twice the number among soldiers with tonsillectomies as among those without (control group). 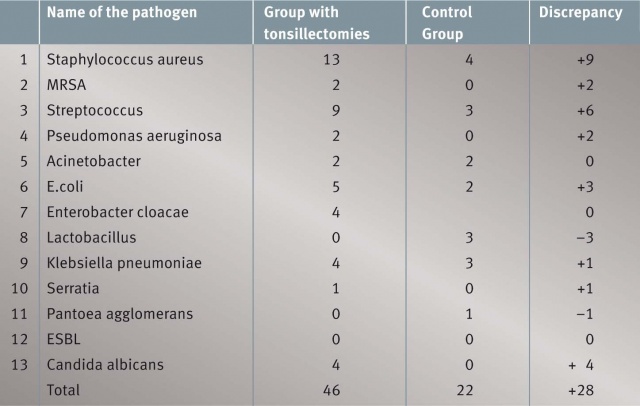