Ureteral trauma is a rare event in urotraumatology and only found in 1 % of all blunt and in 4 % of all penetrating trauma. Most cases are of iatrogenic origin. Looking at battlefield trauma, the rate of ureteral injuries is 5 % of all urogenital injuries on average. They often remain unnoticed for a long period of time. Treatment should be prompt in order to achieve an optimal result. The following article offers an overview of ureteral injuries as well as details of two cases.

Within urological traumatology, ureteral injuries are a rare phenomenon. Its retroperitoneal location, small size and mobility relative to the surrounding tissues mean that injury to the ureter following the external impact of force is relatively rare. Between the kidney and the bladder, its length is around 25 - 30 cm and its diameter around 1- 10 mm. [1]
Ureteral injury occurs in 1 % of all blunt and 4 % of all penetrating trauma [2]. In a multi-centre study (Dorowolski et al.) [3] using data from 61 European urology clinics between 1995 and 1999, the majority (75 %) of the 452 ureteral injuries reported were of iatrogenic origin. External force caused ureteral involvement in 18 % of penetrating and 7 % of blunt injuries.
The ureteral injuries were categorised according to their level as follows [2]:

In American studies, the rate of penetrating injuries was 30 % higher than in Europe [2]. During military conflict over the last 100 years, the rate of ureteral injury following urological trauma was 15 %, with the mean being 5 % [4, 5].

Ureteral injuries are most commonly seen in gynaecology, with a rate of 73 %. In this case, the ureter is usually mistaken for a vessel in the context of operations on the inner pelvic organs (e.g. hysterectomy) and ligated. More rarely thermal damage occurs (e.g. following laser treatment) in the context of operations for endometriosis [6, 7], Surgical procedures account for 14 % of all iatrogenic ureteral injuries. The procedures involved are colon and rectum operations as well as vascular surgery bypass operations [1, 2, 7].

A further 14 % of all iatrogenic ureteral injuries are caused in the context of urological procedures. The most common of these is uretero-renoscopy with stone extraction from the upper ureter. Prostate surgery can also cause ureteral injury, however, due to the prostate's anatomical proximity [1, 2, 7].

Blunt ureteral injuries are usually the result of deceleration trauma causing hyperextension of the ureter. The upper ureter is most commonly affected at the ureteropelvic junction [1, 2, 7].

The biggest studies into penetrating ureteral injuries come from the USA. Most of the injuries in these studies were shotgun injuries. It is not even necessary for the ureter to be directly damaged by the projectile. Pressure or thermal energy can also injure the ureter indirectly. Here too, the upper ureter is the most commonly affected, accounting for 45 % of cases [7, 8].

Around 60 % of iatrogenic injuries and 80 % of injuries following external trauma are diagnosed with a delay ranging from days to weeks. Since in most cases other injuries are of a life-threatening nature, often too little attention is paid to the ureter. Delayed diagnosis of ureteral injury often leads to complications such as urinoma, infection and even sepsis. As a result of this, nephrectomy is not uncommon. Strictures are direct late consequences for the ureter [7].

Late signs of ureteral injury include [7, 9]:

Computed tomography with late phase contrast medium excretion and retrograde pyelography have the most sensitivity [2, 7, 9].

Generally speaking, there are two possible approaches to the treatment of ureteral injury. Depending on its location and the severity of the injury, endourological or open / laparoscopic procedures may be required. The most favourable time for treatment is directly during primary clinical treatment, since the tissues at this stage still exhibit few to no complicating concomitant reactions [7].

Tab. 1: Categorisation of ureteral injuries based on AAST classification

For grade I-II injuries (see Tab. 1), internal splinting of the defect with ureteral catheters (DJ) for at least 3 weeks is indicated. These can be inserted retrogradely via a cytoscopy or antegradely via a percutaneous nephrostomy. The drainage of urine then generally results in a resolution of the defect within a few weeks. In rare cases, in which the defect persists, surgical revision is required. In the case of shotgun and stab wounds, primary suturing should be withheld until debridement of the projectile tunnel is complete [7].

The following principles from the 2013 EAU guidelines should be borne in mind [9]:

An 18-year-old female soldier was a passenger involved in a road traffic accident on her way to the barracks. The vehicle fell at high speed from a height of eight to ten metres from the carriageway onto a bridge and into the track bed underneath. Initially, the most apparent injuries were an unstable fracture of the lumbar spine and massive blunt trauma to the thorax - with abdominal trauma most prominent. These injuries were diagnosed on the initial CT scan carried out at the hospital that treated the patient first. There was also marked contrast medium extravasation from the renal pelvis at the ureteropelvic junction. Treatment was carried out subsequent to this. The haemothorax was treated with drains and the spinal fracture was secured internally with dorsal stabilisation using a fixator. The abdominal trauma did not require surgical intervention.

Once the patient had stabilised, she was transferred to the Military Hospital in Ulm after 14 days. At the time of admission, the patient presented with a septic picture. The CT scan carried out showed massive paranephritic abscess formations. This was found to be due to an untreated urinoma.

The abscesses were treated immediately with percutaneous drainage. Internal splinting was carried out, however the ureteral splint became dislocated from the renal pelvis. As the patient remained septic, open abscess drainage was performed with the insertion of a nephrostomy. Following this, the patient's condition stabilised.

Six months later definitive treatment was instigated. Intra-operatively, the patient was found to have a severely scarred intra-renal pelvis which prevented primary anastomosis of the ureter. Given the patient's well-preserved renal function, the decision was made to carry out a ureterocalicostomy, in which the ureter was anatomosed to the lower caliceal system. Post-operative contrast medium scans showed a tight anastomosis with no drainage obstruction (see Fig. 1).

A 55-year-old labourer fell into a standing drill. He sustained multiple bone fractures, unstable serial rib fractures, spleen laceration and avulsion of the ureter from the left renal pelvis. An emergency splenectomy was carried out on the day of admission. The unstable fractures were treated with osteosynthesis. Following stabilisation of the patient, retrograde pyelography was carried out on the following day which revealed the ureteral avulsion.

On the 2nd day after the accident, a second-look laparotomy of the ureter based on the Anderson-Hynes technique allowed the renal pelvis to be treated with a primary anastomosis (see Fig. 2 and 3). An isotope renogram 3 months following the anastomosis showed the unhindered drainage of urine from the renal pelvis with preserved renal function. 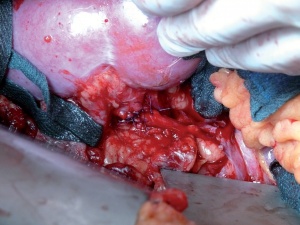 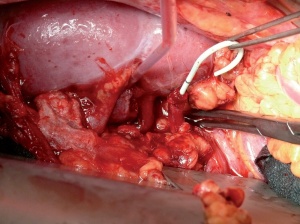 Address of the author: