New opportunities and challenges in the diagnosis of PTSD?

Fig. 1: In comparison with CT and MRI, PET is characterised by a significantly poorer level of spatial resolution. In the case of PET/CT and the new whole-body MRI/PET devices, the deviation can be up to 4.2 - 5.5 mm. Above are examples of scans of a patient with thyroid cancer; the left prepared using 3-Tesla MRI, the right with PET/CT.

Improvements to the methods of diagnosis and treatment of traumatic cranio-cerebral injuries (CCIs) and post-traumatic stress disorder (PTSD) are urgently required from the point of view of the military authorities, the patients’ families and society as a whole. On the basis of the results of the RAND Corporation screening survey, it is estimated that almost one in five (300,000) of the total of military personnel who have taken part in Operation Iraqi Freedom/Operation Enduring Freedom (OIF/OEF) have developed symptoms of PTSD or are suffering from depression while more than 320,000 of the OIF/OEF force have suffered a traumatic cranio-cerebral injury (22). At the same time, a cranio-cerebral injury has been diagnosed in 23 % (907/3973) of the members of one active service unit (23). This overview article considers the potential offered by the use of a hybrid technique involving the combination of positron emission tomography with magnetic resonance imaging (PET/MRI). The PET/MRI technique represents a new diagnostic option that can thus also be used in the diagnosis of non-malignant disorders. With the help of new biomarkers, high resolution, structural, functional and metabolic imaging data, there is now the prospect of detecting the early changes that occur in post-traumatic stress disorder (PTSD), something that will be of particular value in the context of military medicine. 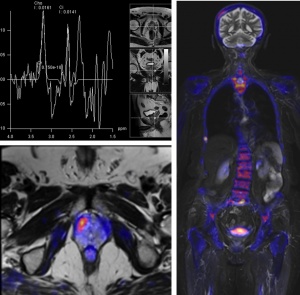 Simultaneous PET/MRI represents the new generation of hybrid diagnostic imaging methods. In comparison with the standard PET/CT technique, this new method has significant advantages: in addition to providing for high-quality contrast of soft tissue, the options of functional imaging and, unlike PET/CT, of simultaneous data acquisition, PET/MRI also requires less exposure to radiation (Fig. 1). The first whole-body scanner with integrated PET/MRI system was unveiled in November 2010 (Siemens Healthcare Biograph mMR). The Biograph combines a 3-Tesla MRI scanner (the technical equivalent of a Siemens Verio system) with a complete PET system that is integrated in the device’s gantry. The most commonly used radiotracer is [18F]-2-fluoro-2-deoxy-D- glucose (or [18F]-FDG), a radioactively-labelled sugar that exhibits differing accumulation profiles in the various body tissues determined by the rate of glucose metabolism. The breakthrough with regard to managing to combine the PET and MRI techniques was achieved by means of replacing the conventional photomultiplier with semiconductor-based avalanche photodiodes, which are resistant to strong magnetic fields (9 - 14). Thanks to the simultaneity of image acquisition by the PET and MRI systems, the image superimposition problems associated with patient positioning and physical movement artefacts have been eliminated (6, 7).

This scanner also exhibits several fundamental technical differences to the standard PET/CT device. There are two factors that influence the quality of the acquired PET data; the use of avalanche photodiodes in place of a photomultiplier and the level of attenuation correction of the PET data that can be achieved with the hybrid device thanks to the incorporated MRI system. In the case of standard PET/CT scanners, the CT equipment is used to estimate attenuation by means of transformation of CT Hounsfield units to attenuation factors at 511 keV (15).

Of course, the MRI signal cannot provide information on the radiodensity of tissue and thus cannot be used directly for attenuation correction of PET results. The modus operandi of the Biograph mMR involves use of an attenuation map generated on the basis of a two-point Dixon MRI sequence (19). The Dixon sequence makes it possible to estimate the level of accumulation of radiotracers in four different types of tissue (fat, soft tissue, lungs and background/air) in the body as a whole and produces an attenuation map on the basis of the relative radiodensity of these materials (16, 17). The results are equivalent to those obtained using the CT attenuation correction method (18), and the technique can thus be seen as viable.

This hybrid imaging technology has the potential of being able to enhance the quality of results that have been achieved with hybrid PET/CT, particularly in oncological indications and the imaging of neurodegenerative processes. Hybrid PET/MRI imaging could also play a major role in future in the field of military medicine in terms of research and clinical aspects; for example in the investigation of dramatic/informatory signs and the attempt to objectify the underlying organic causes of complex syndromes, such as post-traumatic stress disorder (PTSD).

In terms of quality of soft tissue contrast, computed tomography is noticeably inferior to magnetic resonance imaging. For this reason, MRI is the method of choice when it comes to diagnostic oncological investigation, such as scanning of the intestinal organs in the pelvis (prostate). In addition, MR spectroscopy and MR perfusion imaging are assuming increasingly important functions in confirmatory diagnosis of prostate cancer. As the effectiveness of PET has already been demonstrated in an array of such diagnostic situations, it can be assumed that the combination of PET with MRI will prove to be superior to that of PET with CT in this indication range (1 - 5). Major potential applications will be in confirming non-malignancy of neoplasms if punch biopsy results are negative, in targeted (MRI/PET-guided) biopsy and diagnosis in the presence of biochemical recurrence. In addition, the technique is ideally suited for use in whole-body staging (Fig. 2). 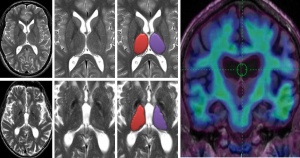 Fig. 3: Two examples of hippocampus volumetry and metabolic imaging. Seen to the top left is the image of a normal hippocampus prepared using T2 scanning. Below this is an example of hippocampal volume reduction in an elderly patient with a history of recurrent cerebro-cranial injury. To the right, in correlation with these, are the superimposed functional images (PET/MRI).

In contrast with the type of CCIs most commonly encountered in the civilian environment that are usually the result of falls, sports-related traumas, etc., almost 70% of combat-induced CCIs are a result of exposure to blasts plus other injuries, i.e. the effects of the explosion and other factors. It is not easy to identify objective alterations in the cerebral region in symptomatic patients with combat-related apparent CCIs using the conventional computed tomography or magnetic resonance imaging techniques. It has already been shown using the first hybrid PET/MRI that the concurrent acquirement of morphological, functional and metabolic data is possible and that this has several related advantages (19, 20). PET/MRI may well come to completely replace the double scanning technique (i. e. PET/CT with MRI). In patients with PTSD, structural and multiregional volume deficits can be detected; one feature that has been repeatedly observed is a reduction in hippocampal volume (HV) that is more marked in untreated patients with severe PTBS than it is in patients with the same disorder who are undergoing treatment. Metaanalyses have found that HV reduction is also present in patients with trauma-associated injuries and not in patients who have not suffered trauma, whereby it is unclear whether this alteration is trauma-induced or was a pre-existing condition in the trauma patients. Hybrid techniques such as PET/MRI that allow imaging of morphological and functional aspects may help us better understand the various pathophysiological processes that occur in post-traumatic stress disorder (24); see Fig. 3 and Fig. 4. 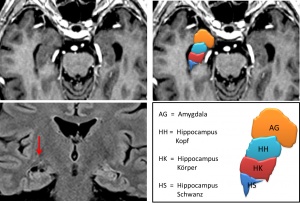 Fig. 4: The hippocampus region: top left in axial T1CE imaging. In the top right, the hippocampus has been divided into regions (head, body, tail) and their volumes, together with that of the amygdala, have been measured. Bottom left can be seen an example of hippocampal volume reduction/atrophy. [graphic AG = amygdala, HH = hippocampus head, HB = hippocampus body, HT = hippocampus tail]

The detection and objective characterisation of the subtle but clinically significant abnormalities associated with CCIs and PTSD are important requirements and represent a challenge to modern neuroimaging skills.

With the aid of radiation dose-sparing hybrid PET/MRI devices, it is possible to combine the advantages of both techniques – and it is necessary to combine these two as the provision of high resolution anatomical images with MRI is essential. In addition, functional methods (fMRI) such as diffusion-weighted imaging (DWI), spectroscopy and dynamic-contrast enhanced (DCE) MRI are becoming progressively more widely employed. The main technical challenge with regard to PET is to provide for appropriate MRI-based attenuation correction of the PET data. With a hybrid PET/MRI imaging device, it is possible to concurrently investigate morphological, functional and metabolic parameters with optimal spatial and chronological correlation. Simultaneous PET/MRI also opens up new options for research – in the field of cardiac imaging, investigations of cerebral functioning and the testing of new tracers in connection with specific MRI techniques. New MRI methods (such as susceptibility weighted imaging) are making it possible to more readily detect microhaemorrhaging and may prove to be of value in the screening of combat personnel following CCIs. The development of high-resolution MRI sequences could also, by means of providing better images of regions of the hippocampus, help clarify what form accumulation processes assume following CCIs and in PTSD. In this context, the PET component may also provide important insights into associated metabolic changes.

This combined, multimodal technique will thus facilitate the detection and characterisation of related abnormalities