Arrival of an severely injured patient in the shock room.

German Armed Forces run five military hospitals. One is located the North of Germany in Hamburg, the beautiful and well-known German harbour city. 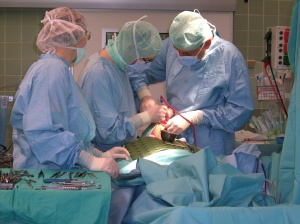 In the operating theatre.

Our mission comprises the medical care for the military service members in northern Germany and for civilian patients in the Hamburg region. According to our mission, the hospital is established as a general hospital with stress on acute care of patients in need of acute medicine, offering health care in surgical as well as in conservative specialties. However, treatment of patients is not the only major mission for the hospital. The training of medical officers after graduating from university until board certified specialists and subspecialists is another major mission for our hospital. Medical officers, nurses and technicians must be trained to perform their profession also in the missions abroad, where ever the German Armed Forces will be sent by the parliament, on the same level of quality in health care that is standard in our home country.

Specialties regarding surgical faculties as well as emergency medicine are very important for military medical services abroad... Consequently our hospital offers a broad spectrum of surgical disciplines. In the department of general and visceral surgery are performed from minor operations to extensive visceral operations with great experience in modern surgical techniques. This is a great range of therapeutic opportunities for the patients as well as a great range of training possibilities for surgeons extending from graduation from university to readiness to be deployed to field hospitals in military missions. The same is true for our department of orthopaedic and trauma surgery. Our hospital has been certified as Regional Trauma Center within the Hamburg Trauma Network in 2010. 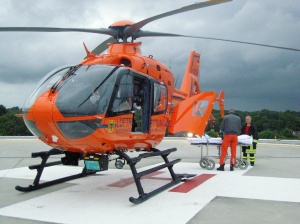 Additionally to these surgical disciplines there are two other important disciplines cooperating to treat head and neck diseases and injuries. The department of Maxillo-Facial-Surgery is well known in the Hamburg region due to the wide range of surgical and therapeutic alternatives. From the point of view of military missions and the experience of the devastating effect of e.g. blast weapons in combat casualties, the numerous surgical operations of facial injuries in our hospital are as well important as the high sophisticated surgical reconstructions of facial defacements including the techniques of reconstruction of the mandibula and implantation of a set of teeth. The department of Ear – Nose – Throat (ENT) offers the whole spectrum of operations in this specialty, from minor operations up to laryngectomies and other major operations. As a specialty in the Hamburg area, a “Comprehensive Hearing Center” was established, offering different techniques to patients with hearing loss including the high sophisticated surgical technique of cochlea implant. The ENT doctors also operate on injuries at the skull base in cooperation with neurosurgeons, another very important specialty housed in our hospital. The ophthalmology clinic amends these specialties to the focus of head and neck injuries within the Hamburg region. These training opportunities are very important for training of medical officers for high level treatment of those injuries in German medical facilities in missions in Afghanistan and elsewhere. 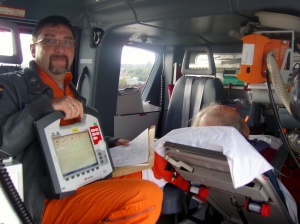 Internal Medicine is a very important department, not only for the elderly civilian patients, but also for military service members suffering from acute and chronical diseases. The department houses specialists for cardiology, pulmonary, gastroenterology, oncology and hematology, and infectious diseases. There is a close cooperation to the department of neurology. This department offers high sophisticated neurophysiological diagnostic possibilities. The medical officers are very experienced in chronic neurologic diseases as multiple sclerosis. The department of dermatology is one of only three dermatological departments within the Hamburg metropol region offering the patients an inhouse treatment. Consequently the treat a lot of patients with severe dermatological problems that cannot be managed on an outpatient basis. In close cooperation with the section of tropical diseases, the department of dermatology has also specialized in tropical dermal diseases. As a unique feature, the specialty of tropical medicine is another focus of our hospital. The department for tropical medicine is since 2006 affiliated to the Bernhard-Nocht-Institute for Tropical Medicine (BNI) and the attached Bernhard-Nocht-Klinik of the University-Hospital Hamburg Eppendorf. By this collaboration it is possible for the German Armed Forces to keep experts in the field of tropical medicine and rare infectious diseases constantly active. In addition to specialist in tropical medicine also many members of the department of anaesthesiology, internal medicine and emergency medicine are trained in barrier nursing. This allows for the unique feature of performing interhospital transfer of rare infectious patients under the condition of barrier nursing as well as sustainable treatment of these patients in intensive care units in the University Hospital Hamburg Eppendorf, enabled only by the additional allocation of trained military medical personnel.

There is the experience to every nation deploying service members in missions that some of those service members returning form missions develop the symptoms of Post Traumatic Stress Disorder (PTSD). The department of Psychiatry has specified for years in the treatment of PTSD and is currently one of the treatment centers of the German Military Medical Service. 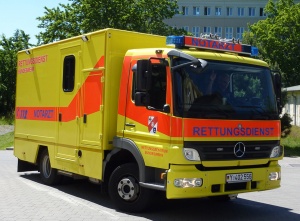 There are a lot of international activities. A few years after being established, in our military hospital were treated Portuguese service members who suffered traumatic amputations in the colonial liberation wars in Angola and Mozambique. Starting in May 1963, over 5000 Portuguese patients have been treated with the climax in the 1970s, when there where dozens of those patients in our hospital at the same time. This assistance is going on until today. The Association of Portuguese disabled veterans ADFA (Associaçao dos Deficientes das Forças Armadas) cares of over 160.000 veterans in Portugal and works together with our hospital closely. Orthopedic surgeons of our hospital care for those patients in improving the prosthetic treatment. Every year, medical officers of the department of orthopedy and trauma surgery travel to Lisbon to see veterans with artificial limbs in cooperation with ADFA and the Portuguese Armed Forces. If necessary, they identify patients who should be treated in Hamburg. Next year the 50th anniversary of this international cooperation will be celebrated. In preparation of this event, a delegation of Portugues Veterans recently visited our military hospital. 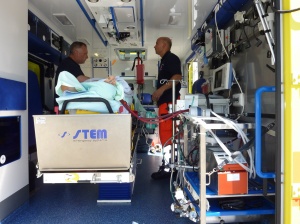 After the Congo-mission had revealed a significant lack of microbiological capabilities in the field the department initiated a project for the rapid PCR-based diagnosis of infections caused by protozoa and  bacteria like Salmonella typhi. 2007 this was in established in Ghana in cooperation with the Kumasi Centre for Collaborative Research. Also a partnership was initiated with the Presbyterian Hospital in Agogo, Ghana. This provides the opportunity to send younger doctors and nurses regularly to West-Africa to gain expertise in tropical   medicine and to directly exchange experiences with African doctors.

Due to a cooperation with the Bernhard-Nocht-Institute the department is also involved into a couple of follow-up studies taking place in Madagascar – one topic is the diagnosis of typhoid fever and the partially PCR – based diagnosis of parasites and protozoa causing diarrhoea in children and adults which is another relevant topic also in field missions. We have participated in the foundation of a microbiology lab and in the training of local staff and technical assistants. When analysing stool samples an amazingly high percentage was found positive for schistosomes which provided the ground for a mass treatment campaign in schools in 2012. Another project is the screening of pregnant women for HIV and other sexually transmitted diseases. Together with the virologists of the BNI we are planning to get involved into a Lassavirus-project in Nigeria due to the fact that teaching and training of barrier nursing methods is a mainstay of the activities of our department. The presence of viral haemorrhagic fevers in Afghanistan and in the Kosovo (also in Libya and Mali) makes it necessary to be prepared. The entomologist Lt. Col. Krueger is involved into two international projects. One is studying the sandfly-vectors of cutaneous leishmaniosis in Northern Cameroon and the second one in cooperation with the University of Pristine deals with the epidemiology of Crimean-Congo-Virus in the Kosovo and is supported by the local state government. 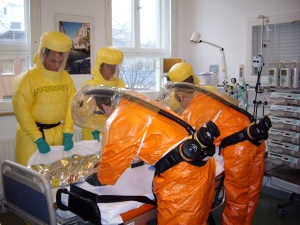 As mentioned above, training in emergency medicine is one major focus in our hospital. Accordingly we work together closely with the NATO Centre of Excellence for Military Medicine (MILMED COE) in Budapest. In our simulation center, we conduct together an international course, NATO Emergency Medical Pre-Deployment Team Training (see MCI 03/12). In this international training military medical service members of several nations work together in handling emergency patients in preparation of international cooperation in the missions abroad.

There has been established a governmental program of international military training assistance led by the German Ministry of Defence. Within this program also physicians, nurses and technicians from non-NATO countries also can be trained in their specialty. After nine months of German language Courses they are sent to the German military hospitals. Those international students planned for our hospitals are contacted during the period of language course. The head of the department concerned where they will work according to their specialty develops curricula tailored to the special needs of these students. In addition to the professional training, the students get an impression of Hamburg, with personal visits to the German Armed Forces Command and Staff College and a University of Armed Forces that are located, and of also Germany. For this reason the guests have the opportunity to visit the governmental district in the German Capital, Berlin, and other military medical facilities, e.g. Military Medical Academy in Munich. The advantage of this international training program for our house staff with students from several countries like Mongolia, Azerbaijan, Armenia, Georgia, Thailand, Mali, Jemen etc.  consists of the exchange of information on the structure, training programs and circumstances in the home countries of our guests. The medical officer responsible for this program in our hospital has repeated contacts to former students of our hospital and has initiated an “Alumni” network for ongoing exchange of experiences among the former students. 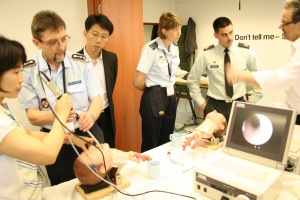 Members of our hospital have also participated in international conferences and workshops, presenting the German experience in military medicine. These conferences are not restricted to Europe but can also be elsewhere e.g. USA, South-Africa, Asia etc. and comprise every medical specialty.

However, we also send German military officers into international trainings. Recently there has been sent the second resident of the department of ENT in row to the French Hopital d`instruction des armées (HIA) Percy, France. There the ENT-residents have the opportunity within one year to be trained in this specialty abroad and learn about the French way of treating ENT patients. They are very welcome and completely integrated in the faculty of the department of Otorhinolaryngology in H.I.A. Percy. Additionally, this is a very appreciated opportunity to extend their knowledge in French language being very important for international cooperation between Germany and France. 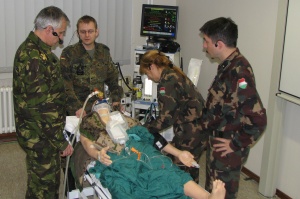 Since its foundation, the German Armed Forces Military Medical Hospital in Hamburg has developed from a facility dedicated to the treatment of military patients only to a modern hospital within the Hamburg region well accepted by civilian patients also. There have been established and extended unique features like “Comprehensive Hearing Center”, tropical medicine and others within the Hamburg region hospitals and the other military hospitals offering high sophisticated treatment to our patients. It grew up to one the major training centre for military medical officers in emergency medicine and as a well accepted training site for young military medical officers in every specialty. The international activities have greatly expanded from the beginning in 1963 and have led to an extensive international network. Even in the future, the German Armed Forces Hospital will be part of an internationally growing military medical community, firmly anchored in modern medicine facilities in the Hamburg region and training military medical personnel in their professions in preparation for deployment to missions anywhere Germany is joining in.