The effort of Luftwaffe and Joint Medical Service in Germany

Mid April 2010, Termez/Usbekistan. After an IED attack in Afghanistan with the loss of several soldiers, surviving German troops needed immediate medical attention due to the battle injuries received. After surgery in a field hospital, the transport to higher echelons of medical care was necessary and the rescue chain as far as back to Germany became activated. Just while transferring four Patients (two of them on a respirator) from a German MEDEVAC C160 aircraft to the MEDEVAC Airbus 310 of the German Luftwaffe, the continuation of the flight to Germany or most other countries in Europe, became impossible dueto flight restrictions - thanks to the ash cloud of the Eyjafjallajökull vulcano eruption in Island. With the patients already on board and medical supplies beeing burned up, what is the best course of action….

Caring for sick or wounded personnel forms part of the moral component of warfare and is a major consideration for military leaders in conducting operations. Expeditionary operations impose additional complications in the provision of this care, with further complexity added when it is conducted in austere locations or the hazardous situations that often typify military activities. To offer the full spectrum of medical support considered necessary – indeed essential – in today’s society, a substantial medical footprint would be required in theatre. However, this is often not feasible for a plethora of reasons, including the prevailing threat, the availability of resources and, not least, cost. Therefore, the timely transport of patients to higher echelons of medical care remote from theatre is standard practice in today’s operations. Aeromedical evacuation (AE), in particular strategic aeromedical evacuation, is routinely utilised to facilitate this. In order to minimise the deployed medical footprint, patients need to be evacuated in a timely manner and this often means that patients are still in a critical condition with ongoing intensive care. Transport assets must, therefore, be equipped to provide intensive medical care throughout the evacuation process. Within the scope of strategic aeromedical evacuation, this period may last for 20 hours or even more. For all these reasons, airborne intensive care units are required. NATO doctrine defines the responsibility for medical evacuation as National, though multi-National cooperation is energetically pursued, and it remains the case that some member Nations do not have the capability to act independently in this field. The ability to allocate nationally owned assets to conduct aeromedical evacuation operations requires the support of a comprehensive organisational effort. The system employed by the German Armed Forces is used as an example. 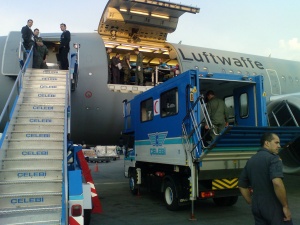 Discounting earlier humanitarian relief activities, the participation of troops from the Federal Republic of Germany on expeditionary operations began in the early 1990s with the Somali operation. Within the German Luftwaffe, this sparked the development of an aeromedical evacuation system far beyond the existing capability of a bare stretcher (or ‘litter’) transport capability. The available fixed wing aircraft, specifically the A310 MRTT, C 160 Transall and Bombardier CL 601 Challenger needed to be equipped with the means to transport intensive care patients. Following some development to allow operation of the C 160 and the CL 601 in an improved aeromedical evacuation role, a system in use by Lufthansa German airlines was further developed and introduced in all of the aircraft mentioned. The Patient Transport Unit (PTU) was thus born, capable of providing all the medical support required by an intensive care patient. This includes monitoring vital data, continuous and controlled application of drugs, and performing artificial respiration, which involves the application of oxygen. Within the A 310 MRTT, 6 intensive care patients can be treated simultaneously, whilst a further 38 litter patients can be provided with monitoring capabilities and controlled drug application. The standard medical crew consists of 25 aeromedical personnel, including a flight surgeon, anaesthesiologists, intensive care nurses and paramedics. In parallel to this technical development, the organisation to run such a system had to be formed and originated from the existing medical branch within air transport command. This also included establishing training capabilities for medical personnel. Today, within a 12-hour notice to move, an aeromedical evacuation aircraft can be launched to recover and treat patients worldwide. In actual fact, a response in even shorter time is regularly executed. Considering those situations where a flight was solely conducted for aeromedical purposes starting in Germany, approximately 40 sorties are flown per year, treating some 60 patients. In addition to this figure, a significant number of patients considered ‘routine’ according to NATO Standardisation Agreement, where transport can usually be scheduled with routine aircraft, were also evacuated. Whereas CL 601 and C 160 aircraft are taken out of their routine tasking and converted to aeromedical evacuation fit as required, one A 310 airframe is ring fenced and preequipped in aeromedical evacuation configuration to ensure the required reaction times. The reorganisation of the German Armed Forces in 2001/2002, building a Joint Medical Service as an independent service besides Army, Luftwaffe and Navy, split the organisational responsibilities within the armed forces. A major part of the organisation in principle and of an actual sortie today is conducted by the Patient Evacuation Control Centre (PECC) of the Joint Medical Service, particularly dealing with the whereabouts of ground transport and patient distribution – a major consideration when moving over 40 patients at a time. The Luftwaffe holds key aeromedical personnel, provides the airframe and conducts the actual flight, as well as running the medical equipment in the aviation environment. The standardisation of medical equipment and aviation requirements is an ongoing process. To give an example of the implications of this, consider something as simple as a military litter or stretcher. The Patient Transport Unit is used in a licensed airframes and must fulfill aviation regulations. It is designed to hold all standardised NATO litters. When a litter is attached to the airframe, as with the Patient Transport Unit, it falls under current aviation regulations. Thus, the litter belt becomes an aviation restraint device. Those devices have a service limit, which necessitates a data sheet for each individual belt. Because litters never had such data provided before, Patient Transport Units have to be equipped with aviation compatible litters.

The complexity and demanding circumstances of strategic medical evacuation operations can be demonstrated via the example as mentioned above. Sitting on the apron in Termez with respirated patients, with the destination airport gone, as did the planned receiving hospital, a decision in very short time needed to be taken. The German operation in Termez has a medical facility with intensive care capabilities for 2 patients, designed as a RON (remain over night) within a CSU (casualty staging unit). Patients there are considered to be transported further on soon. The volcanic situation at that very moment did not allow a predictable flight plan back to Germany. So the responsible flight surgeon discussed with the aircraft commander the possibilities of flying to a european destination not affected by the ash. In assumption that the medical facilities of a large city must be able to accept the patients on short notice, such locations in southern europe were assessed. Istanbul became the location of choice, due to the fact that for the flight path there all diplomatic clearances already were in place (a necessity in international military aviation), rather than e.g. Rome which was discussed either. The PECC in Germany was informed about the new destination and estimated arrivel there in about 6 hours. They started rolling and did a tremendous job, using diplomatic contacts, to find a qualified hospital and arrange ground transportation in such a short time in a foreign country. About the same time as the patiens were initially expected to be in a university-style hospital bed in Germany, hospital treatment could be continued in Istanbul/Turkey, where the identified medical facility did not lack any wishes. 4 days later the already improved patients, partly still ventilated, could be flown to Germany. They all survived.

Beginning in 2010, new aircraft are currently taken into the Luftwaffe inventory, all are capable to be equipped with PTUs on demand. The Airbus A 319 already executed its first strategic AE mission. The Global 5000 will supersede the Cl 601 from mid 2011 onwards and even the Airbus A 340 will be able to take up to 4 PTU for AE mission purposes. In the near future the Airbus A400M will be introduced and it is the intention to equip this aircraft for intensive care AE missions too.

The complexity of aeromedical evacuation operations invites consideration of ways to optimise the use of military assets in combined operations. While the national responsibility for strategic medical evacuation has already been mentioned, there is clear potential benefit in making use of any available airborne asset for aeromedical purposes. Similarly, there is great utility in assuring the interoperability of systems. In an ideal world, what would such a system look like? In expeditionary operations, there is a continuous flow of aircraft in and out of theatre. An organisation that has oversight of all those flights is needed. Secondly, if all the aeromedical equipment available in theatre could be used in any available aircraft, much better utilisation could be achieved. Finally, medical personnel capable of dealing with the combination of patient, equipment and airborne assets from all participating nations would offer maximum flexibility. Unfortunately, there is no structure that currently fulfils this aspiration, and only within national systems or small groups of nations does something like this exist already. So what is the solution? Standardisation would be an answer. It would, however, be a huge effort. A step to gain aviation approval for operating medical equipment aboard an aircraft would involve a commitment to the development of a single type of equipment for use by everyone. The different aviation licensing authorities could then focus on the same equipment, and the medical personnel could all train on the same equipment. Tangible benefits would be achieved from this interoperability. However, can such a dream be realised? Current experience, sometimes within the service branches of a single nation, does not bode well for this wish for standardisation to be fulfilled. Nevertheless, by definition this is not impossible, and if it can be shown that a multinational approach (compared to a national approach) could result in reduced costs for all, this may provide just the catalyst needed for the development of a combined solution.