Since the London Bombings on 07/07/2005, terror attacks have made a resurgence in Great Britain: with 122 terrorism related attacks and 42 deaths in 2017 (1), and, a tactical shift towards the targeting of civilians in marauding terrorist attacks or vehicle based attacks (2). When a terrorist incident occurs, the police cannot guarantee the safety of any medical response. Further to this, a government report concluded that there would be a delay until the scene was declared safe (3). In addition, major incidents’ complexity can impact passage of information between emergency services causing further delays (4). These attacks can involve a large number of casualties (1) and makes scene management difficult due to threat of secondary attack and the location of casualties (5). The delay in the emergency services’ response and need for treatment of catastrophic haemorrhage, provide a clear impetus for casualties to perform life-saving interventions with minimal training (6).

Through military medical experience we have learned that damage control resuscitation, with emphasis on control of catastrophic haemorrhage, is key to survival in the “platinum 10 minutes” (7).   The military have well established initial care: casualties treat themselves with self-aid; or, a colleague will provide the care (“buddy-buddy aid”) - basic airway support and cessation of catastrophic haemorrhage.  This has consistently been identified as a pivotal intervention in casualty survivability (8).  There is a consensus that bystanders should be trained to assist with these tragic events (9).  With up to 29% of trauma deaths being potentially preventable (10) it is ever important that life saving care is administered in a timely fashion.  It has been shown that bystanders are willing to provide immediate care, and, those who have had some prior training provide better quality first aid (11).  Another study demonstrated that the use of a mobile multimedia device significantly increased the quality of emergency care that was provided by untrained helpers (12).

In order to improve the time to immediate medical care, and potentially outcomes, military and civilian medical practitioners united to form citizenAID®  - a revolutionary charity that promotes lifesaving interventions without the need for vast amounts of training.  This article sets out to describe the charity and concept. 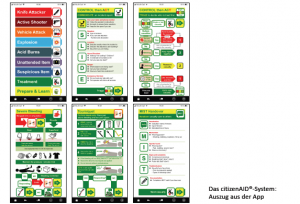 citizenAID®  was conceived by senior clinicians with extensive experience of treating soldiers with blast and gunshot injury on military operations and at the Queen Elizabeth Hospital, Birmingham (the primary medical receiving facility for soldiers injured on Operations and Exercises in the UK).  The guidance citizenAID®  provides transfers military medical experience for the wider benefit of the public – this has been the case for medical advances following every major war in history (13).  The message is simple and builds on the National Police Chiefs’ Council (NPCC) message of “Run, Hide, Tell” (14) and emphasises when safe to do so you should also “Treat”.  Critically, the message encourages the safety of the individual as paramount and advises in the event that speech is not safe when calling the emergency services to dial ‘55’ when prompted to alert the operator of the situation.  The message reinforces the public’s situational/personal awareness and their discernment of danger.

In a crisis, any information needs to be easy to access and follow: citizenAID® has therefore developed a mobile phone app and a paper pocket guide.  These media are based on constructivism: creating meaning from experience, it allows for enhanced discovery -  allowing the learner to link new information with existing knowledge (15).  The intention being that this will then increase compliance and, thereby, provide a better outcome in a stressful situation.  The app and pocket guide focus on the knife attacker, active shooter, vehicle attacks, explosion, acid burns, unattended item, suspicious item and immediate medical treatment of each scenario.  To support familiarisation with the content, citizenAID®  has produced cartoon explaination videos and a film of a bomb scene, available on the charity’s website (16).  The content has been translated into several languages and local emergency information added to support users from Belgium, North America, Australia, Hungary, Italy, Netherlands, Spain and Wales.  Additionally, there is a cartoon children’s book, “Moggy’s coming”, that teaches “Run, Hide, Tell, Treat” to a younger audience and aims to educate children on the principles of preparation.  The book is teaching the message to be ‘prepared and not scared’ showing school aged mice preparing to tell an adult if a cat appears.  As the book develops a cat comes to the school and the school aged mice tell the adults who inform the police and subsequently catch the cat.   This follows the principle that when taught about disasters children are more likely to act as taught and subsequent outcomes are improved, reducing risk and increasing resilience (17).  This message, along with the scientific principles of citizenAID® , have been introduced to the national STEM (Science, Technology, Engineering and Mathematics) project (18).

The discrete medical skills that are taught are CPR, haemorrhage control, the recovery position, splinting of broken bones, burns first aid and basic treatment of hypothermia/environmental protection many of which we know are not done or can be performed poorly (11).  They are guided through the basic first aid of these casualties with a series of simple but detailed pictures and easy to follow algorithms allowing for improved decision-making thereby reducing the human factors (19). 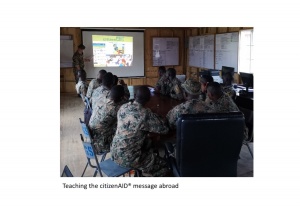 The citizenAID®  message also teaches “Control then ACT” which has been taught in the British military with success for many years as part of the Battlefield  Casualty  Drills (BCDs) (20).  This allows the individual to run and hide.  It also offers the mnemonic SLIDE which stands for Situation, Location, Injured numbers, Danger, and Emergency services required.  The individual is also given the information to supply an ATMIST handover comprising of Age and Time of injury, Mechanism, Injuries sustained, Signs and symptoms, and Treatment given.  Details of how to perform a simple medical triage in the event of a mass casualty is done using the principles of the Major Incident Medical Management and   Support (MIMMS) course (21).  The triage is formed from severe bleeding, walking, talking and signs of life.  Together this provides a holistic and systematic response to a trauma casualty and also assists with preparedness and also resilience. These principles are easily transferrable and can be applied to any traumatic situation such as industrial or agricultural injuries.

citizenAID® was launched to coincide with the National Counter Terrorism Awareness Week in 2016 and the app was launched subsequently through the BBC on the 4th January 2017.  The app, which trended number 1 internationally on its launch, received an innovation award in 2017, and citizenAID®  was named the National Counter Terror Project for 2018 (16). In 2018, “Moggy’s Coming” was awarded "Most Innovative Product of the Year" at the Business Continuity Awards (22). 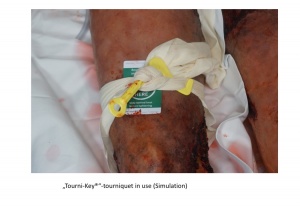 Tourni Key - tourniquet in use (Simulation)

citizenAID® has innovated a device known as a “Tourni-KeyTM”.  This device can be used as a windlass in an improvised tourniquet.  The design has the advantage over other improvised tourniquets that it can be secured and does not result in the applicant being rendered useless for other casualties.  It also comes with an anti-pinch card which reduces damage to the underlying skin.  Its purpose is to be a cost-effective alternative to other commercial tourniquets, available to the public to act immediately to save lives.   Further research is currently underway to evaluate its effectiveness when compared to a Combat Application Tourniquet, the current gold standard.

citizenAID® aims to educate and, thereby, to empower the public to save lives once the threat has moved away or has been neutralised. This principle unifies communities through first aid training of the critically injured. The underlying humanitarian message of citizenAID® continues to ensure all its core materials are freely available to be public. For further information on this initiative and access to the free resources are available at www.citizenAID.org .