A German-British Exchange Project with a Future

The 1st Hanseatic Military and Medical Intern Conference (HaMMICon) at the Hamburg Bundeswehr Hospital, 6 to 10 May 2019

In May of last year, the Hanseatic Military and Medical Intern Conference (HaMMICon) was established and held for the first time at the Bundeswehr Hospital in Hamburg, a city in the north of Germany. The objective of the conference is to promote the international exchange of ideas between medical officers in their first years of training.

During this one-week conference, experts from different medical specialities presented the most important basic principles required in preparation for a first deployment abroad. There were also presentations on initial and follow-on training systems for medical officers in the different armed forces.

The Hanseatic Military and Medical Intern Conference (HaMMICon) was held for the first time at Hamburg Bundeswehr Hospital from 6 to 10 May 2019.

Against the backdrop of the United Kingdom potentially leaving the European Union as well as the lack of an international platform to foster the exchange of ideas between young physicians in the medical services of NATO forces, the Bundeswehr Medical Service Headquarters tasked the Hamburg Bundeswehr Hospital with cultivating existing contacts.

The medical services as represented by Defence Medical Group (North) and Hamburg Bundeswehr Hospital have remained in close contact since a visit by a British delegation to Hamburg in 2017, a training course in medical history named Northern Relief with a focus on the medical care provided to those wounded during Operation Gomorrah in World War II and to potential casualties in a mass casualty situation, and the return visit by a German delegation from the Department of General and Visceral Surgery at Hamburg Bundeswehr Hospital to Doctors‘ Symposium of Defence Medical Group (North) in 2018.

The event was organised under the leadership of Brigadier (MC) Hoitz, former hospital commander and medical director of Hamburg Bundeswehr Hospital, with the aim of establishing an international military medical forum for young medical officers. This year’s training focused on theoretical and practical knowledge and skills in preparation for a first deployment abroad.

Eleven British medical officers from various specialities accepted the invitation to the first HaMMICon in Hamburg. Participants ranged from medical students in their final semester of training to senior physicians in the fields of anaesthesiology, surgery, emergency medicine, psychiatry and urology.

On Monday morning, Brigadier (MC) Hoitz welcomed the participants in the assembly hall and opened the conference. He then gave the floor to Lieutenant Colonel (MC) Hinck, deputy clinical director of the Department of General and Visceral Surgery and the person primarily responsible for organising and conducting the conference. Lieutenant Colonel (MC) Hinck outlined the history of the Bundeswehr hospital, from its establishment in 1958 to the present.

With this knowledge, the participants visited the central emergency room and the international ward, where wounded soldiers from Ukraine were currently being treated.

The next item on the agenda, a presentation of the rescue departmentl by Commander (MC) Schüttler, was met with great approval, as participants had the opportunity to take a closer look at rescue vehicles and, to everyone’s delight, the rescue helicopter. 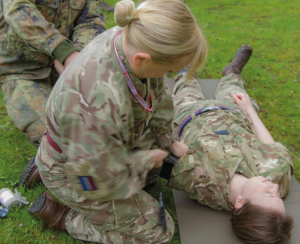 In the afternoon, the programme continued with a military history lecture given by Lieutenant Colonel (MC) Hinck on World War II Operation Gomorrah. In the summer of 1943, thousands of citizens were killed and large parts of Hamburg destroyed in air raids and the resulting firestorm. Lieutenant Colonel (MC) Hinck focused on the medical care provided to the thousands of casualties.

Colonel (MC) Schütz of the Hamburg Command and Staff College then drew a line from the past to the present and future in his very informative lecture on the challenges of medical services in the face of current developments in crisis and conflict situations. His presentation of tasks that will need to be tackled in the coming years was very entertaining.

Commander Stannard, consultant at the Department of Vascular Surgery at James Cook University Hospital in Middlesbrough, and Major (MC) Mulsow from the Department of General Surgery then compared the British and the German medical services in terms of organisation and structure. Both sides were found to face similar issues as well as the difficulty of ensuring military medical training while also trying to strike a proper balance between civilian and military requirements.

A barbecue at the hospital mess provided an opportunity to socialise at the end of the first day of the conference and to continue discussing topics that had been touched on earlier.

The following day was devoted to field medicine.

The focus was on sharing experiences and lessons learned on deployments abroad, which were brought to life by various medical experts with operational experience.

First up was Lieutenant Colonel (MC) Wiemer, head of the Department of Tropical Medicine at the Bernhard Nocht Institute (BNI), with her lecture on tropical pathogens and parasites in Mali and Afghanistan, two theatres of operations for the Bundeswehr. Lieutenant Colonel (MC) Engels then used case studies to illustrate challenges in the field of internal medicine in the countries of deployment.

Despite all the care that is taken to assess the health of military personnel before deployment, they are not immune to heart attacks, for example. Much more common health issues, however, are rather mundane infections, diarrhoea and dehydration.

Following these lectures by conservative care specialists, Colonel (MC) Johann, director of the Department of Orthopaedics and Trauma Surgery at Hamburg Bundeswehr Hospital, gave a very practically oriented presentation on injuries requiring trauma surgery and the treatment options available in countries of deployment.

Lieutenant Colonel (MC) Hinck then outlined the surgical challenges posed by gunshot wounds and blast injuries. In such cases, the primary focus and most important treatment option must be to control any bleeding. Available evidence suggests that haemorrhage is still the most frequent cause of death for those on deployments abroad and the one that, depending on the site of bleeding, is easiest to avoid with immediate and appropriate treatment.

In the afternoon, Commander (MC) Fohr of the Department of Anaesthesiology spoke of his maritime career and the issues and peculiarities that come with providing medical care for crews at sea. For the final lecture of the day, Major (MC) Walter of the Department of Psychiatry then talked about posttraumatic stress disorder. She discussed symptoms and treatment options and detailed the measures that can be taken after traumatic and stressful experiences on deployment abroad.

This very informative series of lectures was followed by a cultural programme. During a guided tour of the city and the town hall, the guests gained an insight into the history of the Hanseatic City and were able to see for themselves what Hamburg has to offer beyond the Bundeswehr hospital.

On Wednesday, our colleagues from the Bernhard Nocht Institute once again opened the day’s series of lectures.

Lieutenant Colonel (MC) Frickmann, a microbiologist and deputy head of the Department of Tropical Medicine, discussed basic hygiene measures that are vitally important given the crowded conditions inside of camps and the often insufficient infrastructure outside of them.

The rest of the day was devoted to lectures given by our British guests. The topics ranged from the career path of a medical service officer and the various opportunities for basic and advanced training to presentations by a number of participants on their individual careers in the British forces. An explanation of the medical training that medical service officers undergo within the British healthcare system was particularly informative.

There is just one military hospital in the United Kingdom. Medical officers receive medical training in hospitals operated by the National Health Service. Doctors are released from their duties at these hospitals for the purpose and duration of military training courses, such as officer education and training, pre-deployment training courses as well as maintenance of military competence and exercises.

Given the relatively small number of medical specialists in the Royal Army, it is impressive how many of them serve on deployments abroad.

In contrast, the system in the Bundeswehr Medical Service in Germany includes five Bundeswehr hospitals under military leadership where all segments of medical training take place.

Particularly the differences in terms of training in pursuit of the same objective of providing medical and military training for highly qualified personnel – and retaining this personnel in the long term – were the subject of lively discussions.

This was followed by a practical training session on the subject of crew resource management, conducted by the Department of Anaesthesiology, Intensive Care and Emergency Medicine. Pre-deployment cooperation and exercises will most certainly be important topics in the next few years, given the increasingly international nature of the work done on deployments.

On Thursday, the Tactical Medicine working group, led by Lieutenant Colonel (MC) Horst and supported by personnel of Helmut Schmidt University and from the 31st Paratroop Regiment in Seedorf, carried out Tactical Combat Casualty Care (TCCC) training. Different stations were set up on the hospital grounds for participants to practice and train skills such as applying a tourniquet, establishing intraosseous access on a medical practice dummy and performing an initial assessment of wounded soldiers according to the MARCH algorithm (massive haemorrhage, airway, respiration, circulation, hypothermia/head).

The training concluded with a military competition, which the British guests won by a narrow margin.

At the end of the week, the participants received their certificates of participation and were bid farewell by the Commander of Hamburg Bundeswehr Hospital.

They were also invited to watch the Grand Arrival Parade on occasion of the 830th Port Anniversary from the observation point at the Bernhard Nocht Institute.

It appears that Hamburg Bundeswehr Hospital and Defence Medical Group (North) close – not just geographically but also at the military medical level – and that the event was popular with all participants.

Hosting an annual event like this for young medical officers from NATO countries like a great idea.