American–German partnership on a regimental level

Why writing an article about an American – German military medical partnership in a magazine that is focusing more on the European engagements in this topic? The answer is easy, because the United States (US) Forces are already in Germany, for example with the LANDSTUHL Regional Medical Center (LMRC). This can´t be moved and most likely the US medical service will play a role in any European military scenario and if it will be only humanitarian aid. So there is an existing partnership on this level with the central military hospital of the Bundeswehr in KOBLENZ. Why not doing this with the medical, tactical units of both nations?
The US Army is providing tactical, medical units of the size of battalions stationed in the KAISERSLAUTERN area in the federal state of RHEINLAND-PFALZ. The former German Sanitätsregiment 22 (SanRgt 22; Med Rgt) “Westfalen” was responsible for the medical support of the civil-defense in this area and so also part of the host nation support for the US forces there. These reasons were the foundation of a unit partnership between the SanRgt 22 stationed in AHLEN and the 212th Combat Support Hospital (212th CSH) from SEMBACH. Besides it should be mentioned, that there was a close partnership with the United Kingdom (UK) 1st Armored Medical Regiment (Armd Med Rgt) at that time stationed in MÜNSTER. After the partnership with the 212th CSH was officialized, there had been a lot of little events on platoon level to train military skills together. The leader’s agreed, that this is not enough for a prosperous partnership of medical units. So the idea of a tri-national, joint medical exercise was born.

The plan of the German lead exercise was to have as infrastructure a German modular medical rescue center (MRC) (NATO role 2 enhanced) with a structural attached US operating room (OR)-section. The MRC should be bi-national manned preferably as mixed teams. Here the focus was on the emergency medical treatment (EMT) section. One UK and German medical evacuation (MEDEVAC) platoon provided ground transportation, also in mixed teams. The tactical medical evacuation (TACMEDEVAC) with a UH-60 BLACKHAWK was done by the US. All supporting elements like exercise control (EXCON), role players, communications, fuel, water and life support in the WESTFALEN-Kaserne was provided by SanRgt 22 with help of attached units. The pharmacy was, by purpose, an American-German joint concept to get the participants train with uncommon medical articles. Adjacent pre-training, small arms shooting and leisure activities in the barracks and sightseeing tours were planned. To realize this challenge, a suitable space for the setup had to be found, not easy in a highly populated area. In the neighboring city of HAMM was a non–active coalmine with its empty coal storage field that complied the demands. After granting permission to use it, the ground had to be straightened out by an engineer unit. The setup began and showed several difficulties, for instance the different voltage being used for the medical equipment or to attach the different tentage. All was managed, sometimes by troop solutions.
The actual medical treatment became a challenge not only because the working language was English, a novelty for the majority of the staff. As long as the subunits were not mixed, just the outcome was judgeable. But with the mixed teams the different approach, based on educational standards, legal guidelines, use of equipment and existing standing operating procedures (SOPs) were inevitable. For example the training level of “Physician Assistant” (PA), common in the US, is just being implemented in Germany. That created a lack on the German side and was filled with physicians. The stringent following of SOPs, done by the US PAs, was another lesson learned. But with a strong willingness of working together, for the sake of the patient, the outcome was magnificent. After two days the teams worked together as having done so all the time. Of course in one exercise not all upcoming problems can be solved, so the leaders were convinced to keep up the multi-national exercises for the future. Because of the huge personnel and material effort of this size and other engagements of the partners, this will not be manageable in a yearly routine. In the meantime it should be worked on a smaller training level. 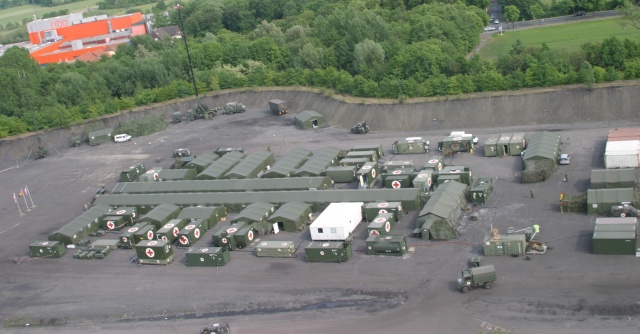 This exercise could be seen as a follow up of the previous one in 2011. This time it was tri-national in all medical levels. The UK provided the SENNELAGER Training Area and had the overall planning and EXCON. As medical units they were bringing in MEDEVAC assets and personnel from the 202nd Field Hospital (UK), a reserve unit. The US 212th CSH did the solely hospital setup with field accommodation. From SanRgt 22 the contribution were a MEDEVAC platoon and a surgical team. Again the working together was in mixed teams. Now there were three nations around the OR table. Again the output was very efficient and the comradeship high. Leaders were convinced that the multinational approach will be the future in military medicine. 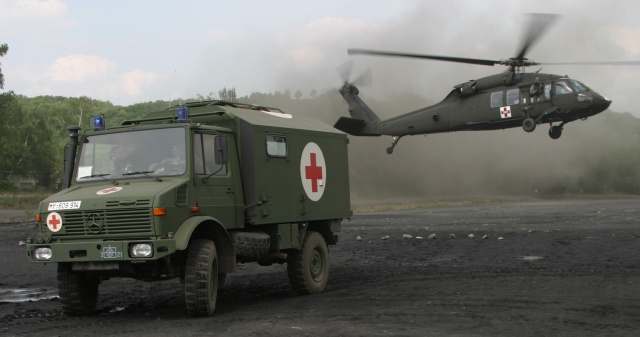 Due to the structural changes in the German Joint Medical Service, the SanRgt 22 in AHLEN and the Lazarett Regiment 21 (Laz Rgt 21; Field Hospital Rgt) in RENNEROD were decommissioned. Out of them the SanRgt 2 “Westerwald” with HQ and one battalion equivalent in RENNEROD and a second in KOBLENZ was formed. With that the established partnerships were handed over to the SanRgt 2. Soon after the UK left with nearly all their troops GERMANY, the 1st Armd Med Rgt (UK) was leaving their last garrison in SENNELAGER and being decommissioned. Unfortunately this partner was gone. Growing in size and changing structure, there was a need for SanRgt 2 to renew their US partnerships. With willingness on both sides the partnership with the active units of the SanRgt 2 and the US Army 30th MED BDE and his subunits 212th CSH and 421st Multifunctional Medical Battalion (MMB) was offi - cially signed with a public ceremony on the 24.08.2019. With the restructuring, SanRgt 2 received two full reserve companies, the 5th and 10th. The 5th SanRgt 2, stationed in RENNEROD, established an offi cial partnership with the US Army Medical Support Unit-Europe (MSU-E), stationed in KAISERSLAUTERN being also a reserve unit. They undertook some small, combined exercises on company (Coy) level ahead of this. 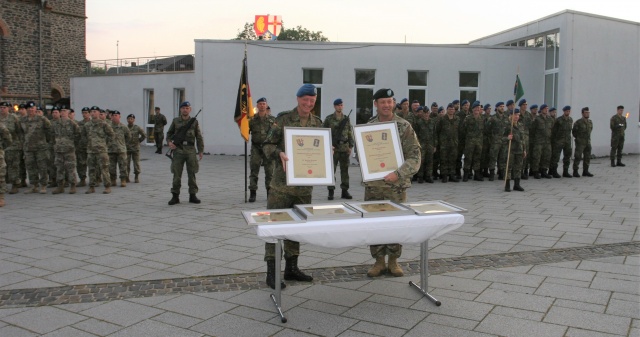 These were two exercises having one active and two reserve (5./ SanRgt 2 and MSU-E) Coy training the patient fl ow from the point of incidence (POI) up to Role 2B treatment in a fi eld setup in the ALSBERG-KASERNE. 2018 it was highlighted by the visit of the Inspector General of the Bundeswehr and the Surgeon General with their very positive acknowledgment of the partnership. An exercise 2019 was shown to the public during a garrison-day in RENNEROD.

In 2020, unfortunately with the intensifying of the CoVid-19 pandemic, the planned participation of physicians of the 5./SanRgt 2, being embedded in the 212th CSH, had to be cancelled. For the year 2021 the US FTX DEFENDER 21 is to hold place in the south-eastern NATO region of Europe. Facing the same pandemic diffi culties in the execution, the medical part of the exercise is transferred to the area of the BAUMHOLDER training ground. With the invitation of the 30th MED BDE to join this exercise, SanRgt 2 is in the planning to contribute with physicians in the newly formed 519th Hospital Center (HC) and units in EXCON and MEDEVAC.

Exemplary outlook for the partnership

With its planned setup of a permanent training center for MEDEVAC up to Role 3, 30th MED BDE is giving a great opportunity to do combined training on a small level. With medical expertise from both sides it will be possible to develop combined SOPs and create effective structures for an effi cient treatment of our patients.